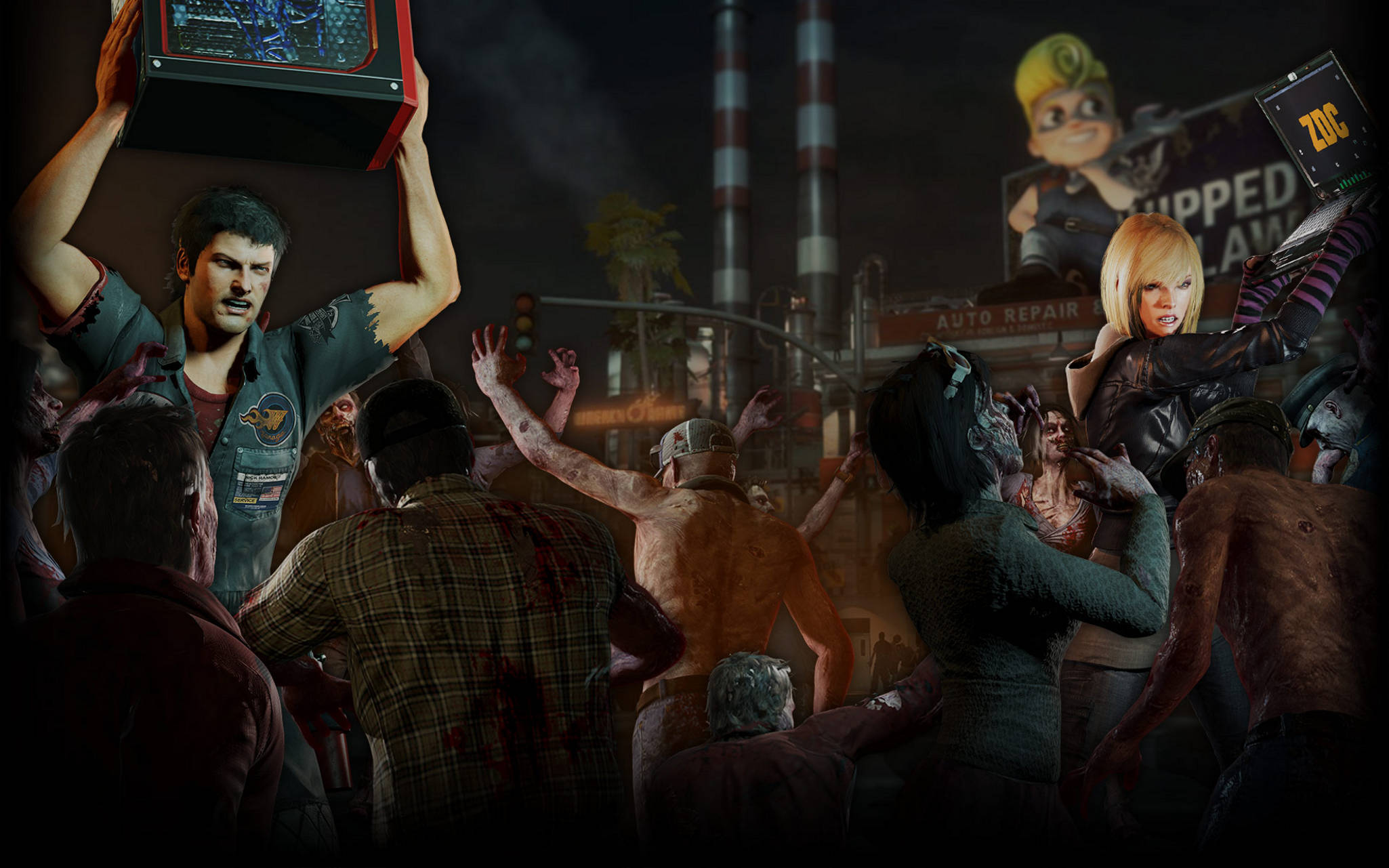 What's on your mind?

Hi all, just wanted to let you know that my role as WM with Fandom is over 6th March. If there is anything I can do for this community beforehand, please reach out during this time.

Best of luck with the wiki and to its community in the future!

So, watching Dead Rising 2: Case Zero, and noticed something. Isn't this guy in front of Chuck one of the Psychos from the main Dead Rising 2 game? I mean, those suspenders are all kinds of noticeable. 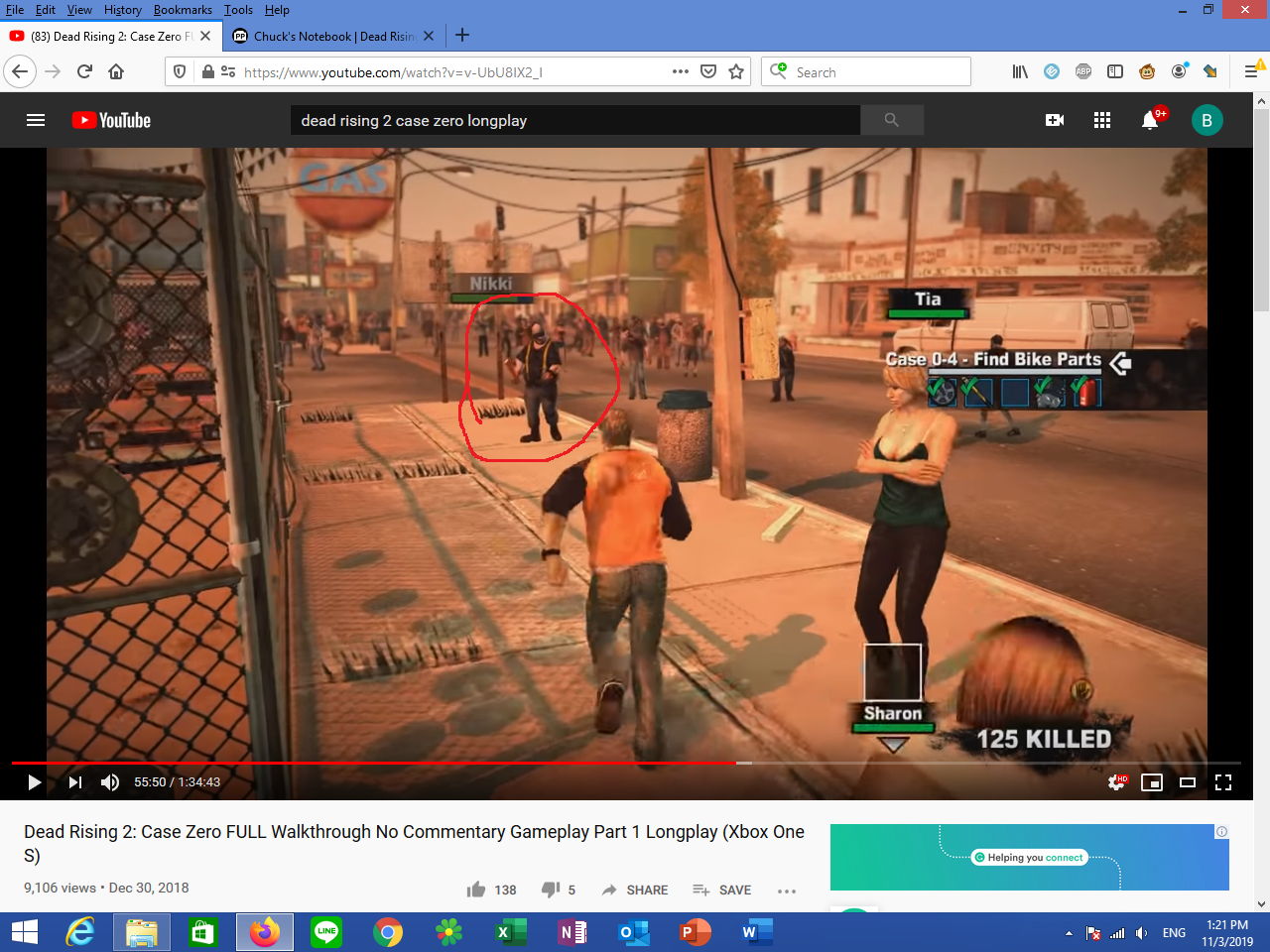 In Dead Rising 3 they already found the cure, and I guess I get the fact that they went to an area where they were still experimenting people with zombies, but isn't Frank already supposed to be immune to becoming a zombie?

Why does the wiki have no information on the Exo Suits?

Hello all, I'm The Embraced One or TEO, and I'm the Fandom Wiki Manager for this Wiki. I'm here to act as a liaison between you and Fandom Staff and help you and your community. If you ever have any questions or issues related to the Wiki, its features (editing, templates, layouts, etc.), or anything else, feel free to reach out to me on my message wall and I will be happy to help out!

I feel like now that the Dead Rising 5 article exists, it should be featured on the main pages.

Its an odd question but...

Every franchise has a waifu

Do anyone know can I make some of dead rising Weapons in real life or is it not real?

Yesterday I got an idea of an Infinity Mode that is not canon at all, but is like a fun mini-game. I would like to see it as an actual game.

Infinity Mode Ultimate: A mini-game that sets you in the rules of the Infinity Mode, there is food in the mall but it does not regenerate. All survivors and psychopaths from Deadrising 1, 2 AND 3 are in this and all attack you. I only left Deadrising 4 out because people don't like it much. They all drop food and weapons.

Now here comes the trippy part. The mall you are in is some kind of multi-universe put together mall that has parts of the malls and areas from Deadrising 3 mashed together (example Linkin Park is mixed with Fortune Park) (Royal Flush Plaza connects to Paradise Plaza) and makes one huge map to explore, the goal is to survive 17 days before survivors and psychopaths disappear. I know that this may never be possible because they would have to make the survivors from DR1 and 2 to look like DR3 graphics. But I thought it would be an insane gamemode in a non canon deadrising.

So in Dead Rising 1, I remember that the first time I heard of the 8 survivor rule, I thought it meant the most survivors overall you could save was 8. So you’d literally have to kick survivors out of the security room as time went onXD

Anyways, if that WERE the case, which 8 survivors would you choose? This is ONLY for optional survivors, so no Otis, Brad, Jessie etc.

You can either list them off swiftly or give detailed reasoning for each individual (like me). I’d prefer the latter, but I’m here to curiously discuss, not force people to write an essay.

BURT THOMPSON & AARON SWOOP- Burt and Aaron have always stuck out to me as the awesome comedic duo. They’ve always stuck with me the most for SOME weird reason. Heck, I even went out of my way to save them during my Zombie Genocider playthrough. Burt the tough guy, and Aaron the weak dude. I love them both, and it makes me sad that it’s rare for both to survive initial playthroughs (obviously, Burt more often survives while Aaron dies but there was a playthrough I saw where one guy obliterated Burt with a sledgehammer but got Aaron back to the security room). I know a lot of people hate Aaron, but Burt does give a shoot. For all we know, they could’ve known each other since preschool man.

PAUL CARSON- I’ve also enjoyed the idea of a savable psychopath, and we even share a lot of things in common to be honest. It’s not like he’s cowardly playing along just for the sake of survival either, and I’ve always loved the road to redemption, so I do want to get him through.

“I bet even that machete guy was just a nice old man before all this happened.”

PAMELA TOMPKINS- she are is too innocent, people.

YUU TAKANA & SHINJI KITANO- Now in this circumstance, it’s sympathy above all else. I’ve always HATED the idea of innocent people getting punished just for being at the wrong place at the wrong time and nothing else. Look at that one unnamed dude killed by the T-Rex at San Diego in Jurassic Park II. All he wanted to do, was take a nice night stroll through his hometown. Punishment? Torn apart by a dinosaur. Yuu and Shinji just wanted to vacation overseas! At this point the only difference is that they’re torn to shreds by zombies instead of a dinosaur. But not on my watch!XD

Also, I don’t think Japan would be happy if their citizens were killed on our land on our watch either.

Oof. Now this last one’s a tough one. I’m maybe one of 15 players who actually legitimately care for most of the survivors. Let’s see... Tad and Brett are kinda awesome. I really love Nick and Jennifer too. Gordon’s cowardice gives me a major sense of duty to protect the weak. But if I HAD to choose one...

RAY MATHISON- I love Ray’s concept too. He’s very sensitive on the inside and a weak looking man, but equipping him with a shotgun shows he truly has what it takes. I like him. He’s truly chill:3

Okay so am I the only person that is wondering where in the world is Katey during the events of Case West if it is considered canon. If it’s canon than Katey is still alive, and Chuck just left her in fortune city for the firebombing... WTF Chuck?

so i was playing dead rising 4 and i looked all over the thirsty amazon and i never found the key to the locker that unlocks the blue prints for the froztee penguin can somebody help me?

i need to find it
you didint look hard enough! >:C
did you read the wiki wrong?

I have played Dead Rising 2 OTR since it was released on xbox 360 and now today i bought the original Dead Rising. And holy hell am i getting grabbed a lot. EVERY SINGLE ZOMBIE that you walk past tries to grab you. And every other zombie succesfully grabs you. I can not walk from Point A to point B without getting grabbed ten or more times. And every single time when you get grabbed you lose 1 whole block of hp. In Dead Rising 2 OTR getting grabbed is way less frequent. And when i try to do some evasive moves, the zombies still catch me and grab me. It is becoming unplayable.

The dialogue for “Everyone knows Slappy” is a mess, I tired to correctly edit it but the edit got rejected, Do you think anyone can do something about this?