8-Ball is a victim in Dead Rising 2 appearing in Case 6-2: Last Stand, one of the soldiers under the command of Dwight Boykin who died during the rescue operation. He reappears in Dead Rising 2: Off the Record with the same role.

In Case 6-1: Help Arrives, 8-Ball was in Sergeant Dwight Boykin's battalion when the military came into Fortune City to rescue any survivors and to clear out the zombies. He was killed by the zombies.

Having been killed by the zombies, Dwight was able to drag him down to the Underground with several other soldiers. Filled with insanity, Dwight called to 8-Ball to cover the left flank, later commenting on his efficiency. 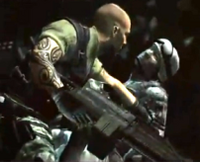