ATMs (automated teller machines) are machines found throughout the game world in Dead Rising 2, Dead Rising 2: Case Zero, and Dead Rising 2: Off the Record. They are usually found in pairs, and can be destroyed for cash.

In Dead Rising 2, they will yield $2,500 each when broken. As they frequently appear aside one another, a single good swing of a sledge hammer or similar heavy weapon can break both in a single swing, allowing the player to net $5,000.

Retrieving money from a destroyed ATM 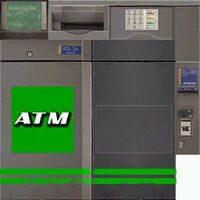 Skin of ATM from PC game files
Community content is available under CC-BY-SA unless otherwise noted.