"I won't let you stop the ride gramps! If the ride stops, the zombies come back, and that won't be any fun at all!"
—Adam, threatening Frank

Adam MacIntyre (also known as Adam the Clown) is a psychopath appearing in Dead Rising and Dead Rising: Chop Till You Drop. He was a clown performer found at the Space Rider roller coaster in Wonderland Plaza during the scoop Out of Control.

In Dead Rising 2: Off the Record, it is revealed that he has a brother named Evan MacIntyre, who is also a clown, though since the events of that game are non-canon, it is unknown if Evan actually exists.

In Dead Rising 4, Frank can dress up as Adam as part of the Capcom Heroes game mode.

Out of Control[edit | edit source]

Main article: Out of Control

Once a clown performing in the Willamette Parkview Mall, Adam went insane when the zombies devoured his audience. When Frank arrived to investigate the malfunctioning Space Rider roller coaster, Adam confronted him with two chainsaws and prevented him from shutting the ride down, as the noise kept the zombies at bay.

After he was defeated, he laughed maniacally as he fell onto his two chainsaws. He died convulsing in laughter as the chainsaws ripped his stomach apart. After retrieving the key card from his body, Frank rescued a mall employee, a janitor named Greg Simpson, from the ride.

Defeating Adam will also reward Frank with the Small Chainsaw, which will respawn in front of the Space Rider at Wonderland Plaza.

In Infinity Mode, Adam first appears in the Wonderland Plaza from 0:19:00 to 1:07:00 and is armed with his two Small Chainsaws. In his equipment, he carries a Japanese Radish, a Golden Brown Pizza, an Untouchable, a Frying Pan and a Push Broom. Later Adam appears in Paradise Plaza from 6:00:00 to 6:07:00 and he carries the same items he had before.

It may also be worth noting that Adam does drop two small chainsaws when killed, but they do not reappear near the ride controls as they do in 72-Hour Mode.

Adam is highly acrobatic for his large size and often rolls, somersaults and jumps very high in the air throughout the area. He attacks mainly with his dual chainsaws, but he has a variety of other tricks at his disposal. He is also capable of blocking firearm shots or melee attacks with his chainsaws. If he blocks a melee attack, the weapon used against him will break.

Further information: Out of Control/Gallery 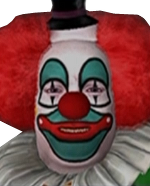 Adam's model within the game files.

Adam with his chainsaws.

Blowing up a balloon.

Adam about to slice Frank with his chainsaws in "Chop till you Drop". 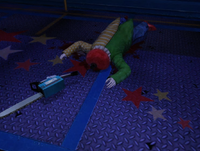 Bonzo from Dead Rising: Watchtower that might be a reference to Adam.
Add a photo to this gallery

Retrieved from "https://deadrising.fandom.com/wiki/Adam_MacIntyre?oldid=399463"
Community content is available under CC-BY-SA unless otherwise noted.