Adrian Lee is an unsaveable victim in Dead Rising 2. He was killed in the zombie outbreak in Fortune City.

Adrian was listed by Gretchen Peregrine on the August 6, 2010 Tape it or Die blog post as one of the members whom they would meet with in Fortune City.

Adrian was a spectator for the Terror is Reality event when the zombie outbreak occurred in Fortune City. Adrian was seen heading for the exit in the Fortune City Arena but he was killed by zombies before he could escape. 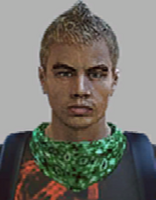 Notebook Entry.
Add a photo to this gallery
Retrieved from "https://deadrising.fandom.com/wiki/Adrian_Lee?oldid=368012"
Community content is available under CC-BY-SA unless otherwise noted.