Heavy metal personified. Found on the stage in the Silver Strip.

Allen Ash is a survivor in Dead Rising 2. He is found performing at the Silver Strip during the mission Rock Heroes. He is the bass guitarist for the goth metal band Angel Lust. He reappears in Dead Rising 2: Off the Record with the same role.

Ash and his band mates, Floyd Stone and Jeanna Slick, are seen performing a concert to a crowd of zombies that have congregated below the stage in the Silver Strip. He and his friends believe those in the crowd are actually fans until Chuck makes them realize zombies have overrun the city. After finishing their song with a mighty chord, the zombies are all killed due to the sound waves and then the band mates agree to be escorted. When escorted, he uses his electric guitar to defend himself.

Allen is one of the crazed survivors Frank can fight in Sandbox Mode. He will spawn in Fortune Park near the Uranus Zone entrance with an assault rifle. Once defeated he drops his weapon and $10,000. 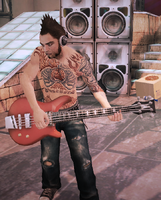 Allen and his band mates.

Allen is brought back to the shelter.

Allen in the safe house. 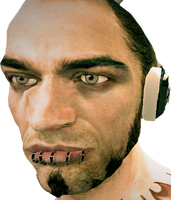 Your reward for saving him. 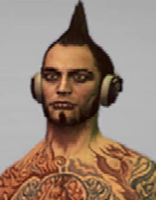