Assistant to the deranged diva. Found in captivity at the Slot Ranch Casino.

Back stage area of the Slot Ranch Casino

"I think it's time for a career change."
—Allison, after being rescued

Allison Perkins is a survivor in Dead Rising 2. She is found in the Slot Ranch Casino during the mission One Hit Wonder. She is the assistant to former pop star Bibi Love, and was captured after Bibi had gone insane. She reappears in Dead Rising 2: Off the Record with the same role.

In One Hit Wonder, Allison is found in the backstage area at the Slot Ranch Casino, where she is tied up and wired to explosives by the psychopath Bibi Love. As Bibi welcomes Chuck, whom she mistakes as the new stage assistant, she berates her "incompetent crew" and blames them for the mishaps.

As Bibi demands Chuck to run several errands for her, Allison gives him hints towards what should be done to satisfy Bibi. She reveals that Bibi will only accept a tuxedo from Modern Businessman in the Royal Flush Plaza. She also reasons that Bibi is so far gone that she cannot tell the difference between people and zombies, so Chuck should either use firecrackers or mix up something in the Food Court to lure the crowds. After Bibi says it is time to begin the show, she gives Chuck instructions of how to work the control panel.

After Bibi finishes her song, she lets go of the trigger and falls into a small crowd of zombies. Her hostages are released, and Allison immediately agrees to follow Chuck to the Safe House.

Allison is tied up 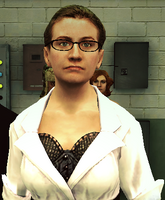 Allison rests in the Safe House 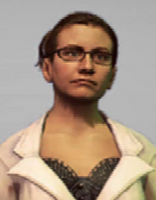