Found holed up in a gun shop.

"What a dreamboat! Are you really just a journalist?"
—Alyssa Laurent

Alyssa Laurent is a survivor appearing in Dead Rising and Dead Rising: Chop Till You Drop.

She is found in Huntin' Shack in North Plaza during the unmarked scoop Gun Shop Standoff. She has occupied the gun store with two other survivors, and is initially distrustful of Frank.

Alyssa has occupied the gun store in North Plaza with two other survivors, Jonathan Picardsen and Brett Styles. When Frank approaches, they mistake him for a zombie and open fire until he exits the store. Once they realize their mistake, Jonathan goes over to ask Frank what he wants with them.

Frank offers to take them to the Security Room and promises that a helicopter is coming to rescue them. Alyssa is doubtful as she has seen that the door to the Security Room has been welded shut. Brett then requests Frank to provide some proof by bringing them a picture of the duct.

Once Frank shows them the required photo, the three survivors agree to follow him.

In Infinity Mode, Alyssa appears in Theater 4 at Colby's Movieland with Verlene Willis from 3:07:00 to 3:19:00 and is armed with Submachine Gun. In her equipment she carries Cheese, an Acoustic Guitar, 2x4, a Mailbox Post, and a Ceremonial Sword. 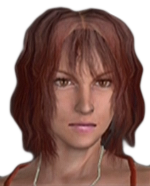 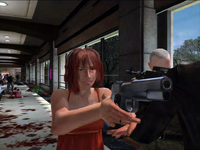 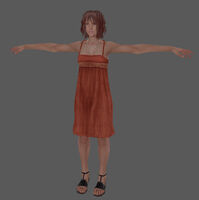 Add a photo to this gallery
Retrieved from "https://deadrising.fandom.com/wiki/Alyssa_Laurent?oldid=399425"
Community content is available under CC-BY-SA unless otherwise noted.