TK's twin co-hostesses on "Terror Is Reality." "Sexy" doesn't even begin to describe these sisters.

Amber Bailey is a blonde woman in a golden dress who serves as one of Tyrone King's co-hostesses, along with her twin Crystal Bailey, in the game Terror is Reality and one of the two tertiary antagonists in Dead Rising 2. She and her sister provide nice eye candy as well as some taunting for the contestants. She reappears in Dead Rising 2: Off the Record with the same role, involved in Case 5-3: Two Girls, One Club.

In the introduction, Amber and her sister assist Tyrone in opening up the show for Terror is Reality, introducing the contestants. After the show, Amber can be found by the contestant locker room, standing outside a door, waiting for her sister to arrive. They flirt with and taunt Chuck whenever he participates in the gameshow.

Some time during the outbreak, Amber and Crystal gave a news reporter a video that showed "proof" of who caused the outbreak, blaming Chuck. They later appeared, captured Rebecca and hold her hostage. In Case 4-1: The Source, Chuck arrives to meet the reporter, but the twins attack him and he has no choice but to fight back. After defeating either Amber or Crystal, the other sister runs to the body of the fallen sister and proclaims that she cannot live without her "other half." Chuck watches as the sister prepares to stab herself through the abdomen, he shouts for her not to do it, but she does and dies shortly after. Chuck can proceed to take both their katana swords as usable weapons.

Amber and Crystal help TK run the show as Frank battles zombies in an event. After the show, Amber taunts Frank in front of her dressing room in backstage area.

Amber and Crystal are the ones responsible giving Rebecca the tape of Brandon blowing up the cages in the Arena that started the outbreak. When Frank arrives at the Shoal Nightclub to find Rebecca, the twins attack Frank with their swords after throwing the captured Rebecca to the ground. However, when one twin dies, the other commits suicide, being unable to bear the thought of living without her "other half."

The twins are the only characters included in a Sandbox Mode mission. In Double Trouble Frank must kill one twin as fast as he can. The money reward Frank gets is based on how fast he defeats her, not on the defeated twin being a psychopath. The defeated twin will NOT drop her weapon. 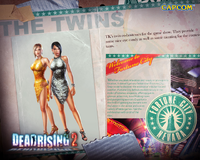 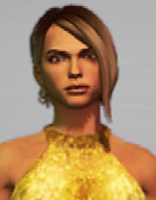