A depressed man brought to the verge by the zombie outbreak. Found in the Palisades Mall.

"Wow, tough love. Isn't that what they call it? You must sense a spark of life still within! I think I'm sick of listening to me, too! Let's go!"
—Andy upon agreeing to follow Chuck

Andy Talbat is a survivor appearing in Dead Rising 2 during the mission Dead or Alive? as he contemplates to commit suicide or not.

Andy was listed by Gretchen Peregrine on the August 6, 2010 Tape it or Die blog post as one of the members whom they would meet with in Fortune City.

Stacey gives Chuck a call about a man armed with a shotgun standing on some slots in one of the malls. Upon finding the man, Chuck will have to have a long conversation with Andy about the collective intelligence of the zombies that Andy has killed on top of a group of slot machines.

If Chuck leaves Andy's presence after initiating the conversation but before Andy joins, Andy will defect, saying "It's too much." or "The only way out is the easy way out." He will commit suicide by putting his shotgun to his chin, and blowing his own brains out. 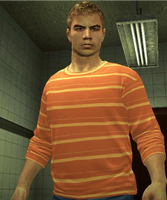 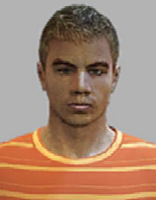