Prolonged fire or firing while on the move will degrade the accuracy of the weapon; it works best when fired from a stand-still, in short bursts or at a large target. Its ammo count is doubled if the player is wearing the Soldier of Fortune Skills Pack.

The assault rifle can be considered "middle of the road" when compared to the Merc Assault Rifle and Light Machine Gun. The former is more obtainable but has half the ammo capacity while the latter has superior firepower with a carry limit.

The assault rifle can be first found on the awning of Hungry Joe's Pizzeria and rarely in Military Cases. After Case 6-1: Help Arrives, several assault rifles can be found in Fortune Park and Silver Strip in the hands of zombified soldiers.

Frank's firing stance. This is the same one from the Soldier of Fortune Skills Pack 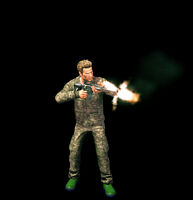 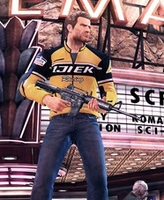