The Bazooka Cannon is a combo weapon in Dead Rising 4. It is made by combining a Toy Cannon with any explosive. The blueprints are unlocked by completing Case 4 of the main story.

The Bazooka Cannon works like an RPG. It fires rockets that follow a relatively straight flight path for a decent amount range, after which it suddenly drops down; similar to the projectiles fired by the Railgun. The rockets explode on impact, dealing high damage to anything within the blast radius. The size of the explosion is slightly larger than the rockets the normal RPG fires. All of these make the Bazooka Cannon a great choice for clearing large clumps of zombies and human enemies at range. 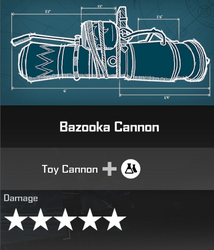