"Y'know, I wondered this the the whole time, but why do you suppose those creeps wear raincoats?"
—Beth, upon reaching the Security Room and on the True Eye

Beth Shrake is a survivor appearing in Dead Rising and Dead Rising: Chop Till You Drop.

She is found in Colby's Movieland during the scoop A Strange Group. She is one of the victims being held captive by the True Eye cult. She can be rescued after Sean Kenanan's defeat.

Beth has been captured by the True Eye cult and is about to be sacrificed by Sean Keanan, leader of the cult, when Frank arrives to their rescue.

After Sean is killed, Frank frees Beth and the four other hostages. He then convinces them to follow him back to the Security Room.

After being rescued, she will wait in the room with the blue door. When Ronald Shiner complains about the lack of food, he rallies up the other survivors in the same room, including Beth, to head out and look for food.

If Frank does not stop Ronald's mutiny, Beth will leave the Security Room along with the other survivors in the same room. They will no longer count towards the number of rescued survivors.

Beth appears in the Warehouse from 2:07:00 to 2:19:00 and is armed with a shovel. In her equipment she carries a Japanese radish, a push broom handle, a hockey stick, a paint can, and a frying pan. 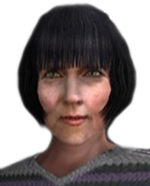 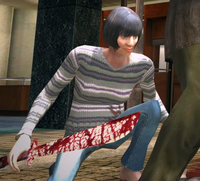 Beth armed with a machete 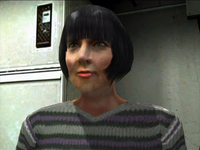 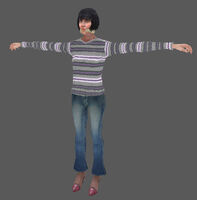