This former one-hit wonder won't let anything - not even a zombie outbreak - come in the way of her big comeback show.

"I get EXPLOSIVE when I have to wait."
—Bibi Love, on waiting for her demands to be met

She is an aging pop singer who is clinging to her former glory. As a result of the outbreak, she has taken several of her employees hostage in the mission One Hit Wonder. She reappears in Off the Record with the same role. 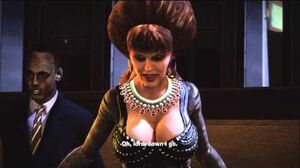 After the zombie outbreak in Fortune City causes the last of her fans to flee, she has gone insane and taken over a stage. Using wires and a bomb with a remote detonator, she threatens to blow up her hostages, Juan, Allison, and Cameron, if they try to leave before her show is over.

When Chuck comes across her, she mistakes him for a stagehand and asks Chuck to get her a refreshment, get dressed for her show (a Tuxedo, available from Modern Businessman in the Royal Flush Plaza), round up a group of "fans" (10-15 zombies) and finally, rig the lights for her performance. A minigame that is very similar to Guitar Hero where the player must press the appropriate buttons to do the appropriate lighting effects.

If Chuck completes the minigame, she will thank him for his help, then release her hostages and jump from the stage into the crowd of zombies, still thinking of them as fans. She will realize they are zombies and Chuck has the choice of saving her or leaving her.

If Chuck fails the minigame, or attacks her, or kills one of her hostages, a cutscene plays where she yells at him for ruining her comeback before sitting down next to Cameron and activating her bomb, killing herself, Cameron, Allison, and Juan. Note that Bibi can get killed by the zombies if the player lets them climb the stage.

This mission reappears in Dead Rising 2: Off the Record with no changes. When Bibi is brought back to the Safe House, however, she will reward Frank with one hundred dollars.

Bibi is one of the crazed survivors Frank can fight in Sandbox Mode. She will spawn on her stage in the Slot Ranch Casino with a Large Wrench. Once defeated she drops her weapon and $25,000.

Bibi on the stage.

Bibi jumps for her hungry "fans".

Safe at the Safe House. 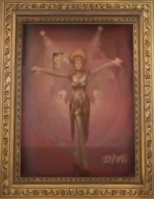 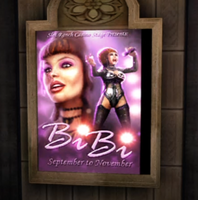 A poster promoting Bibi found throughout Fortune City in Dead Rising 2: Off the Record. 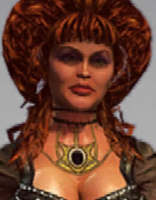