Trapped in a warehouse since before the incident began.

Man in a Bind
Ronald's Appetite

"I cannot believe this. How could there be such a thing as zombies?"
—Bill, upon reaching the Security Room

Bill Brenton is a survivor appearing in Dead Rising and Dead Rising: Chop Till You Drop.

He is found trapped behind a pile of cardboard boxes in In The Closet during the unannounced scoop Man in a Bind.

Main article: Man in a Bind

Bill is found trapped in the storage area of a clothing store in the Entrance Plaza. He calls out to Frank when he hears somebody entering the store. After removing the cardboard boxes trapping him, he will thank Frank and explain that he had been trapped for two whole days after the boxes fell down while he was getting the place arranged. He walks out of the store only to find a number of zombies in front of the place. After letting him know about the situation, Bill agrees to follow Frank to the Security Room.

After being rescued, he will wait in the room with the blue door. When Ronald Shiner complains about the lack of food, he rallies up the other survivors in the same room, including Bill, to head out and look for food.

If Frank does not stop Ronald's mutiny, Bill will leave the Security Room along with the other survivors in the same room. They will no longer count towards the number of rescued survivors.

Bill appears in the Crislip's Home Saloon in the North Plaza from 0:07:00 to 0:19:00 and is armed with a nail gun. When killed, he drops a pack of melted ice pops, a cleaver, a machete, a sledge hammer, and a Tool box. 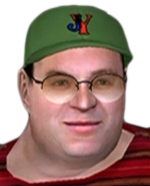 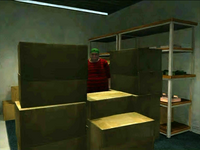 Bill is trapped behind boxes. 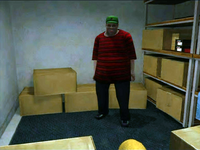 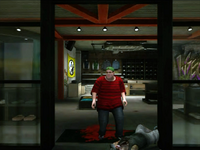 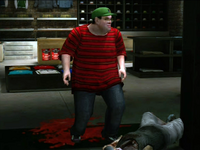 ...and decided not to run off.

Bill safe in the Security Room.
Community content is available under CC-BY-SA unless otherwise noted.