May have a little bit of a problem. Found in the Shamrock Casino.

Know When to Fold 'Em

In Know When to Fold 'Em Chuck will encounter Bill Montagu gambling at the Shamrock Casino. He does not care that the zombies have overtaken Fortune City and only wants to win back the $20,000 he lost gambling. He will refuse to follow Chuck until he pays him $20,000. Once Chuck pays him the initial amount, he will demand $5,000 more before finally following Chuck back to the Fortune City Emergency Shelter.

In Off the Record, Bill is instead located inside of the Americana Casino and can be rescued during the first day.

Bill is one of the crazed survivors Frank can fight in Sandbox Mode. He will spawn in Atlantic Casino with a bowie knife. Once defeated he drops his weapon and $10,000. 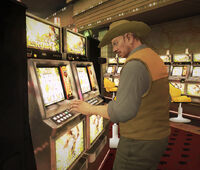 Bill may have a problem. 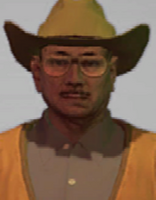 Off the Record.
Community content is available under CC-BY-SA unless otherwise noted.
Advertisement