The blacktail is a unique handgun that Frank starts out with in Dead Rising: Chop Till You Drop.

It holds 15 bullets. It breaks during the zombie invasion in the Entrance Plaza and must be fixed by gun shop owner Cletus Samson to be used again.

After Cletus fixes the gun, it will be available to buy for $50000.

"A handgun with great overall quality and balance"

After the door to the mall is sealed up and before Otis gives Frank the Love Lasts a Lifetime quest, Frank finds out his blacktail is broken. 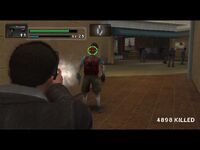