The Bon Bomb is a combo weapon in Dead Rising 4.

It is a melee weapon made by combining a Holiday Cracker with any explosive. The blueprints can be found inside of a barn at Tom's Compound, making it inaccessible until Case 2.

It has a special effect of spawning toys whenever it explodes, similar to when the Holiday Junk spawns certain weapons whenever it makes contact to a zombie in each swing. 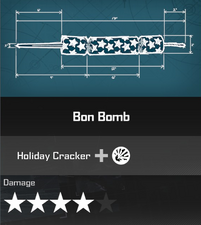