Brad Park is a ZDC Agent who believes very strongly in upholding the law, the ZDC's mission and in helping others. Through the course of The Last Agent, he discovers the crooked politics involved in causing the outbreak and eventually turns rogue, believing that he can make a difference without the government's help. He himself is infected and is implanted with a Zombrex chip. He later decides to cut his chip out after he discovers that he is being tracked and "hunted like a government dog".

He manages to escape Los Perdidos after saving many survivors and finding the cause of the outbreak. He holds the evidence required to expose John Hemlock for causing the outbreak. During the events of Dead Rising 4, he was promoted to Colonel of ZDC.

If Jamie's missions are followed through (which are only accessible through Smartglass), Jamie will constantly point to Brad (whom he refers to only by derogatory names like "villain") as being the one responsible for a lot of the events that are happening, as well as concocting a plan (called "the Ultimate Solution") to kill off all the illegals, which includes poisoning a supply of Zombrex.

However, once Brad is finally encountered at Almuda Center, he is heavily injured and in need of some Zombrex. If Nick goes to the supply and gives it to him, it'll be revealed that the Zombrex is not really poisonous, and that Brad actually put Jamie in jail several years ago for being an illegal Zombrex dealer. When asked about the "Ultimate Solution", he says that it's actually a plan to find a cure for the illegals, but that it's likely a pipe dream. Afterwards, he takes a bit of time to rest at the train station.

ZDC Agent Brad Park is very near to death from his lack of Zombrex when Nick Ramos finds him. Nick decides to give Brad a life saving dose of Zombrex, even though he expresses his disgust that the ZDC is harming people. When Brad feels well enough to get up, he decides to find out why Nick would make this claim.

A woman named Cora gets in contact with Brad over radio and asks him to bring her Zombrex. Brad finds a van loaded with Zombrex and takes it to Cora. Afterwards, the two decide to figure out why the Zombrex chips appear to be malfunctioning. Brad gathers the chips from the King Zombies which he then returns to Cora. Cora realizes that the chips have all been purposely turned off and suggests Brad finds a hacker who can help.

Brad enlists Nelson the hacker's help to track down signals that have been blocking the Zombrex chips. Nelson is eventually successful in finding a jamming signal which is coming from the Mayor's Mansion in Sunset Hills. Upon arriving at the mansion, Brad kills the soldiers in the area and examines the server station to find information about a military lab at the South Almuda train yard. Brad goes to the secret military lab and finds the corpse of Diego Martinez and several scientists and doctors after the botched experiment that was carried out by Marian Mallon. Brad also finds proof of the military prison camp at the Ingleton Taxi Company. He cuts out his Zombrex chip to avoid being tracked before leaving to find the military camp.

When Brad investigates the Ingleton Taxi Company, he comes across a wounded and infected Adam Kane. Kane confesses to Brad that President Paddock had been murdered by General Hemlock, and that the black box he has in his hands contains evidence of what the government had "really" been up to in Los Perdidos. Kane gives the box to Brad and tells him to "do the right thing". Afterwards, Kane shoots himself in the head to avoid turning.

Having the evidence that he needs, Brad gets in contact with Cora and plans to meet up with her so that they can get out of the city. After picking up Cora and the remaining survivors in the city, Brad radios for a helicopter extraction. The group arrives at the Dilly Diner and is picked up by the rescue chopper, escaping the city before a potential firebombing.

Brad can be seen reflecting on all that he's learned and decides to throw his ZDC badge away.

Brad is now working as the Colonel for the ZDC. Brad tracks down Frank West, who's now working as a schoolteacher under the alias Hank East. He tells Frank about an outbreak in Willamette and that his pupil Vick is already in town investigating. Brad convinces Frank to help him, and the two fly into Willamette to investigate. Their helicopter is shot down by James Caballero, and they crash into the mall's food court.

Initially, Brad and Frank stick together as they start their investigation. After clearing out the crash site and getting themselves armed with weapons, Brad tells Frank to meet him at The Virago Hotel. At the hotel, Frank helps the hotel's receptionist fend off against zombies and soldiers while Brad attempts to open a door. After learning that Vick is much more ahead of Frank than what was initially thought, Frank is determined to catch up. He tells Brad that he will only slow him down and the men go their own separate ways.

Throughout the course of the game after this point, Brad is never seen until the game's ending escape sequence. He communicates to Frank through speech only. The two men exchange information about Obscuris, and Brad will update Frank on Vick's whereabouts. He also provides Frank with most of Vick's Cloud Upload messages.

At the end of the game, Brad and Vick are able to safely board a new helicopter and escape., with Frank sacrificing himself to the zombies to allow them time to escape.

Brad in the opening of The Last Agent.

Brad decides to cut out his chip.

Brad throws away his badge. 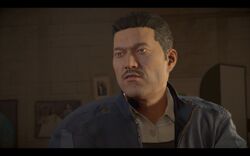 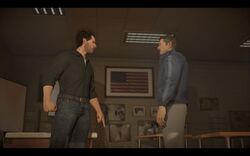 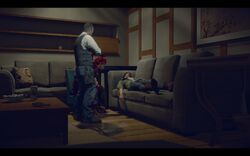 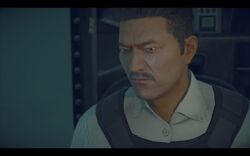 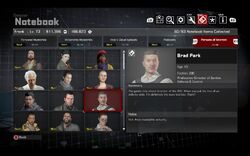 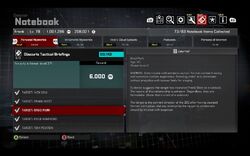