A member of CURE driven mad by the outbreak, who believes the only way to stop oppression is to equalize everyone - by making them all zombies.

Off the Record
Uranus Zone

"The movement is growing... soon, we'll all be part of the change..."
—Brandon, just as Chuck arrives in the bathroom

Brandon Whittaker is a psychopath appearing in Dead Rising 2 during the mission Chuck the Role Model. He is a CURE activist who went insane after the zombie outbreak decimated Fortune City.

In Dead Rising 2: Off the Record, Brandon is given a much larger role. Instead of just being a psychopath, he is a major character. He serves as a fresh recruit of CURE who was tricked into helping Tyrone King release the zombies from their cages in the Arena. He is directly responsible for the outbreak in Fortune City. He is involved in the Introduction and Case 2-2: A Familiar Face.

As a CURE member, Brandon came to Fortune City to protest against "Terror is Reality." He was a part of the protests outside the arena, and went insane after seeing his fellow CURE members being eaten alive by the very creatures they were trying to protect. He fled the bloodbath and took shelter in the men's bathroom of the Americana Casino.

At some point during his stay in his hiding place, he saw the news story about Chuck Greene releasing the zombies from the Terror is Reality Arena. His insanity led him to the conclusion that Chuck had released the Zombies to stop zombie discrimination and bring peace to the world, by turning everyone into zombies therefore making everyone equal. Brandon sees this as a brilliant plan and decides to help by capturing survivors and turning them into zombies. He kidnapped a young woman named Vikki Taylor and prepared to feed her to a zombie, though it is unknown how he managed to trap the zombie, and whether he has killed other survivors in this way.

When Chuck arrives at his bathroom, Brandon initially praises Chuck for his imagined plan and claims that he is trying to help. However after Chuck saves Vikki Taylor from Brandon's zombie, Brandon claims Chuck has lost his willingness to complete the plan and attacks with a shard of broken glass. Chuck defeats Brandon and he stumbles into the stall where he has kept the zombie and is bitten. Realizing he will become a zombie, Brandon uses the piece of broken glass to slit his throat.

Brandon is observed in conversation with Tyrone King during the exchange of a money case and bombs in a warehouse within the Fortune City Arena. He is spotted by Frank West, who secretly photographs the confrontation. Once the talk is over, Brandon proceeds to arm the bombs and detonate the explosives, causing a city-wide outbreak.

Stacey Forsythe spots Brandon on the security monitor dragging and kicking Vikki Taylor into the restrooms of Uranus Zone. Upon investigation, Frank finds Vikki tied up and Brandon babbling about what he did at the Arena and the zombies. He then proceeds to slit Vikki's throat, killing her before attacking Frank. After being defeated, he gets bitten by a zombie and commits suicide by cutting his own throat to not reanimate as zombie.

Brandon is one of the crazed survivors Frank can fight in Sandbox Mode. He will spawn in the bathroom in Uranus Zone armed with a shard of glass. Once defeated he drops $25,000. 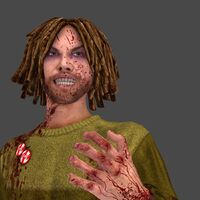 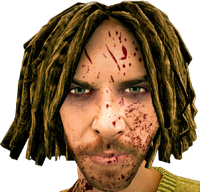 "Oh, I see. You're losing the courage to finish what you started!" 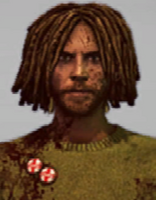 Notebook Portrait in Off the Record. 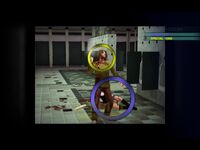 Off The Record, photo op.