The Burning Skull is a combo weapon in Dead Rising 2 and Dead Rising 2: Off the Record. It is created by combining a bull skull with motor oil.

In order to get the combo card, Chuck must buy all of the available fortunes at the fortune teller outside of One Little Duck Bingo on the Silver Strip.

In Dead Rising 2: Off the Record, Frank needs to watch Paddle Party Massacre to unlock the combo card. The fortune teller only gives PP.

It can easily made in the Food Court, as there are two bull skulls to the right of Wild West Grill House next to some motor oil.

"Putting a bull skull on your head and charging around is ok, but it's nothing compared to setting that same skull on fire. Trust me."[1]

No fire, appearance when dropped 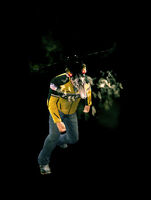 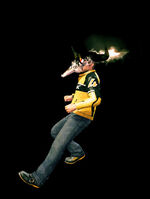