Found hiding behind barricade with Aaron.

"Dammit! Just what I need! Another crazy person harassing me!"
—Burt, upon seeing Frank
"Phew... This has been a helluva ride, but I feel safe now."
—Burt, upon reaching the Security Room

Burt Thompson is a survivor appearing in Dead Rising and Dead Rising: Chop Till You Drop.

He is found barricaded in a clothing store in Al Fresca Plaza during the scoop Barricade Pair with his friend Aaron Swoop.

Unlike any other survivor in Dead Rising, he is immediately hostile towards Frank and will attack him on sight.

Burt is found with his friend Aaron Swoop inside a barricaded store in Al Fresca Plaza. When Frank breaks down their barricade to enter the store, Burt will attack him with a baseball bat under the impression that Frank is a psychopath.

After Frank hits him back five times, he surrenders. Frank then explains that he is here to bring them back to a safer place. Burt agrees to follow Frank, which will also cause Aaron to join.

After being rescued, he will wait in the room with the blue door. When Ronald Shiner complains about the lack of food, he rallies up the other survivors in the same room, including Burt, to head out and look for food.

If Frank does not stop Ronald's mutiny, Burt will leave the Security Room along with the other survivors in the same room. They will no longer count towards the number of rescued survivors. 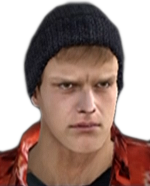 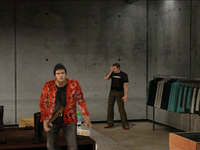 Burt and Aaron in hiding. 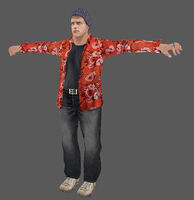