Bibi's manager. He talks the talk. Found in captivity at the Slot Ranch Casino.

Cameron Welch is a survivor in Dead Rising 2. He is held hostage by the psychotic Bibi Love during the mission One Hit Wonder. He reappears in Dead Rising 2: Off the Record with the same role.

In One Hit Wonder, when Chuck arrives, he informs Chuck of Bibi's newfound insanity, and that they'll be killed if they escape. He tells Chuck to do Bibi's tasks to save them.

He is unable to walk during the rescue attempt, and Chuck must offer his shoulder to assist him, or transport him on a wheelchair; like other survivors, the Leadership magazine lets him move around like a normal survivor. 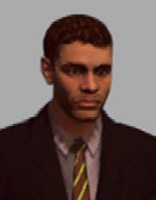 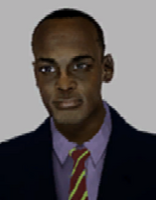 Notebook Portrait in Dead Rising 2: Off the Record