Can Drinks is a Dead Rising thrown weapon. It is a rectangular cardboard package of 12 aluminum cans filled with a lemon flavored carbonated beverage.

Frank throws individual cans at zombies, similar to Gems and CDs. The drinks sometimes ricochets off of one zombie to peg another. There are twelve cans per box.

When the Throw stat is maxed out, the can drinks will also deal additional damage from headshots, instantly killing any zombie. 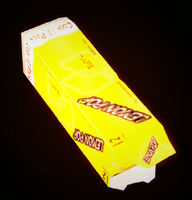