It is a piece of large cardboard with a picture on its front, which is held up by a smaller piece of cardboard on the bottom back. This sign is used to advertise upcoming events, such as movies.

The cutout in Dead Rising 2 and Case Zero is of Protoman from Capcom's Mega Man series. The cutouts in Off the Record are of Chuck Greene and Frank West.[1] 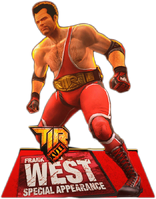