A pathologically loyal public servant. Neither snow, or sleet... nor zombies shall keep him from his appointed rounds.

"Neither rain nor sleet nor hail, nor zombies are going to keep me from my appointed rounds!"
—Carl, explaining his "oath"

Carl Schliff is a psychopath in Dead Rising 2. He is a mailman that is determined to never fail at his job and can be found in the mission Mail Order Zombrex.

He reappears in Dead Rising 2: Off the Record with the same role, though he accuses Frank West of mail fraud after he signs for a package, declaring that he has damaged the postal service and America and attacks Frank as a result.

"[My father] once said to me that there are two jobs that he has the utmost respect for: soldiers, and postmen. I understood why he respected soldiers. But postmen? That through me for a loop at the time. Now I think I understand...[Carl] seemed more worried about someone signing for his delivery...than he did about being bitten. I can respect that, although I think he may be a little out of touch with reality."[1]

In Mail Order Zombrex, Carl is a mailman that has never failed at his job and plans to keep it that way, regardless of whether or not there's an outbreak going on. Chuck Greene spots Carl trying to deliver a package in the Royal Flush Plaza. Noticing Chuck, Carl asks him to sign for the package. Chuck tells Carl about the zombies, but Carl responds that he has sworn an oath and angrily demands a signature for the package. Chuck sees that the package Carl has is Zombrex, and realizes that he is willing to hand it over in return for anyone's signature. Chuck takes the opportunity and signs for it, but his signature allows Carl to identify him, and believing he is the cause of the outbreak, refuses to give him the Zombrex, instead giving him a mailbomb. Chuck tosses the bomb back into Carl's mailcart, which explodes. He jumped out and mumbled that he never failed his postal service and just failed because Chuck released the zombies.He then picks up a nearby shotgun and says `YOU ARE GOING TO PAY!`, before attacking Chuck.

Carl and Chuck fight, and Carl is defeated. Chuck then takes the Zombrex out of Carl's bag saying he needs it for his daughter. With his dying breath, Carl signs his own clipboard and pulls out another bomb package, letting it detonate in his hands, blowing him into pieces.

Carl has 3 attacks. The first includes him firing his shotgun in which Chuck can dodge during the battle. His second attack is his melee which involves him hitting Chuck with his shotgun. This will only happen if Chuck gets too close to him. His last attack is where he will throw explosive packages at Chuck which usually only happen after he hits Chuck with his melee.

Carl is one of the crazed survivors Frank can fight in Sandbox Mode. He will spawn in front of The Man's Sport in Royal Flush Plaza. Once defeated he drops his shotgun and $25,000. Carl may also drop the psychopath clothing, if the player did not obtain them through the story mode already.[Verification needed]

Carl calls out to nobody, requesting a signature.

"THIS PACKAGE REQUIRES A SIGNATURE!"

Carl reciting his oath; notice his tattoo on his right arm.

Carl getting pissed off.

Carl readies his Shotgun for revenge.

Carl before blowing up. 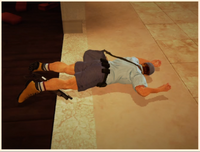 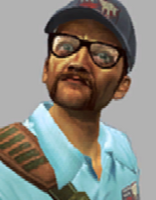