A little loco. Run down by the former TiR contestant Leon Bell.

"Hey, over here! Over here!"
—Carlos, before being killed by Leon

Carlos Mertiz is a victim appearing in Dead Rising 2. He was killed by Leon Bell in the mission Meet the Contestants.

Carlos is found wandering in the Platinum Strip. As Chuck talks with his rival Leon, Carlos waves them down, shouting for help. Leon revs up his Slicecycle and heads towards him. Carlos catches on quick and attempts to make a run for it, but Leon swiftly runs the bike's blades through his torso, slicing him in half. Leon's crazed rationale is that humans are worth "more points" than zombies as they "move around too much". It is impossible to save Carlos, as he is killed during the cutscene at the beginning of this mission. 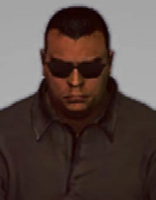