Case 1-1: A Dangerous Encounter is the first case Frank West receives in Dead Rising. It occurs after escaping to the Security Room when the zombies break into the mall, and is activated by entering the hall in the Warehouse toward Paradise Plaza. It consists of a cutscene and is completed after the cutscene ends.

After completing this case, Frank receives a handgun and Case 1-2: Backup for Brad begins.

As Frank approaches the Paradise Plaza door, he hears a sound coming from behind him. Preparing for the worst, he picks up a fire extinguisher and swings it at the source, nearly missing Jessie who he mistook for a zombie. Jessie's reaction caused her to fall backward and sprain her ankle, hindering her mission to assist Brad, who was seen being fired upon in the Food Court. Frank convinces Jessie to let him take her place and she gives him a handgun. Before they part ways, he insists that afterward, they are going to have a chat once the commotion is over.

After the Case 1-1 cutscene, Frank is in front of the exit door to Paradise Plaza. Change from the handgun Jessie gave Frank to a melee weapon (such as the lead pipe) and open the door to enter Paradise Plaza, one of the main sections of the mall. 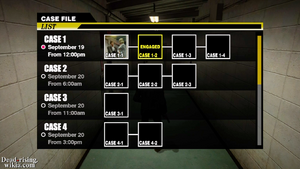 and then selecting "Case File" from the menu.[1]

When janitor Otis Washington has important information on a scoop, he uses the transceiver he gave Frank to get in touch with him. A scoop cue is information detailing events and whereabouts of other survivors. As with cases, scoops are time-based. A time gauge appears along the top right side of the screen when a scoop is uncovered.[1]

Otis can be cantankerous and doesn't take lightly to being interrupted when calling Frank. In order to hear him out, Frank has to refrain from using a weapon during a call. If Frank does cause on interruption, Otis typically rings him back a few moments later and begins all over again.[1]

In Chop Till You Drop, this mission is preceded by both Love Lasts a Lifetime and Twin Sisters.[3]

Frank prepares for an attack.

"I've covered wars, you know."
Add a photo to this gallery

Retrieved from "https://deadrising.fandom.com/wiki/Case_1-1:_A_Dangerous_Encounter?oldid=394119"
Community content is available under CC-BY-SA unless otherwise noted.