Frank West must defend himself against the Bailey Twins, who are armed with katana swords and holding Rebecca Chang hostage. It is similar to the Dead Rising 2 case Case 4-1: The Source.

After defeating either Amber Bailey or Crystal Bailey, the other twin runs to the body of the dead twin and falls to her knees in horror. The living twin admonishes Frank West for killing her "other half", which she proclaims that she cannot live without. She bitterly ensures Frank that he will not leave Fortune City alive. Frank watches as the living twin prepares to stab herself through the abdomen. Although Frank shouts for her not to do it, she does. As the twin is dying, she lies by her fallen sister and peacefully places her hand on the dead twin's head.

Frank grins in disbelief. He heads over to Rebecca Chang, unties her and helps her back on her feet. After some casual smalltalk about Rebecca being tied up, Frank expresses disappointment in her for being reckless enough to trust the Twins as reliable sources. Rebecca refutes Frank by reminding him the Twins had the tape in the first place. She offers to make it up to him with some vital information she heard as a hostage.

Rebecca informs Frank that Tyrone King has another helicopter coming in and landing on the roof of the hotel, so that he can evacuate Fortune City. Frank and Rebecca decide to head there to see it for themselves and intercept TK for an interview before he can get away. 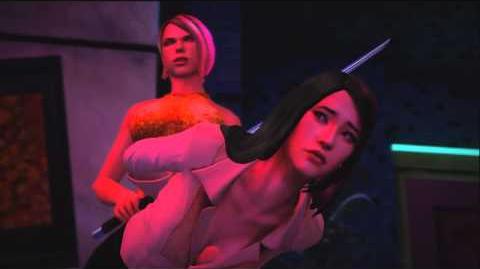 Add a photo to this gallery
Retrieved from "https://deadrising.fandom.com/wiki/Case_5-3:_Two_Girls,_One_Club?oldid=375521"
Community content is available under CC-BY-SA unless otherwise noted.