Start a Wiki
watch 02:21
The Loop (Games)
Do you like this video?
Dead Rising 2
Cases and Missions • Characters • Weapons • Stores • Endings

For the Dead Rising case, see Case 7-1: The Last Resort

The Off the Record case file equivalent is Case 8-1: Bad to Worse.

After repairing the safe house's door controls and stopping the invading zombies, Chuck Greene runs into Tyrone King, who has somehow gotten free of his restraints and is under attack from a lone zombie straggler. Chuck kills the zombie, but not before TK is bitten. Knowing he will turn soon, he begs for a shot of Zombrex.

After securing TK once more, Chuck reviews some of the footage that Rebecca Chang shot while down in the underground tunnels, where he notices that the gas is coming from the underground. Suspecting that this might be the source of the mutagen gas covering the city, Chuck heads out to investigate. 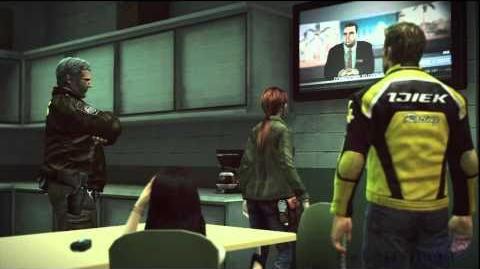 CASE 7-1: Bad to Worse
A zombie mutating gas leaked from the underground - I've got to find the source.
Add a photo to this gallery
Retrieved from "https://deadrising.fandom.com/wiki/Case_7-1:_Bad_to_Worse?oldid=376882"
Community content is available under CC-BY-SA unless otherwise noted.