"Woooooeeee! Blazes, it's a real live one! Brother, am I ever glad to see you!"
—Chad, when he sees Chuck

Chad Elchart is a survivor appearing in Dead Rising 2, during the mission Lost... He has been separated from his wife after the outbreak and is searching for her. Chad reappears in Dead Rising 2: Off the Record with the same role, though he is found on the Silver Strip.

In the mission Lost..., Chad is found near a Dining at Davey's, shooting zombies with his shotgun. He explains to Chuck that after the outbreak at the Fortune City Arena, he and his wife Doris were separated. They had set up a spot where they would meet if they ever got lost during their stay in the city. He believes Doris may be by the Arena and will join Chuck to look for her.

My woman, god bless her, is always getting me into trouble. 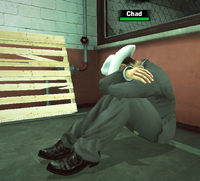 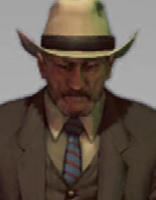