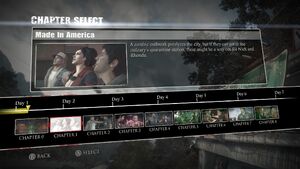 "A zombie outbreak paralyzes the city, but if they can get to the military's quarantine station, there might be a way out for Nick and Rhonda."
—Chapter Description

Chapter 1 (Made in America) is the second chapter of Dead Rising 3.

It takes place during the second day of the game.

Retrieved from "https://deadrising.fandom.com/wiki/Chapter_1_(Made_in_America)?oldid=395231"
Community content is available under CC-BY-SA unless otherwise noted.