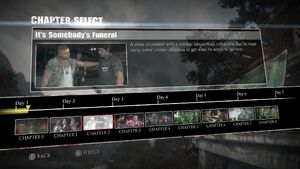 "A close encounter with a zombie leaves Nick vulnerable, but he must make some uneasy alliances to get what he needs to survive."
—Chapter Description

Chapter 2 (It's Somebody's Funeral) is the third chapter in Dead Rising 3.