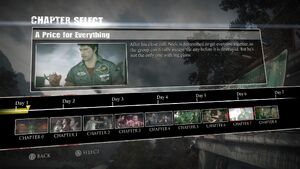 "After his close call, Nick is determined to get everyone together, so the group can finally escape the city before it is destroyed. But he's not the only one with big plans."
—Chapter Description

Chapter 7 (A Price for Everything) is the final chapter in Dead Rising 3 before Overtime Mode.

Retrieved from "https://deadrising.fandom.com/wiki/Chapter_7_(A_Price_for_Everything)?oldid=395234"
Community content is available under CC-BY-SA unless otherwise noted.