Was held in warehouse of movie theater.

"I can't stand the idea of just disappearing. So... Take my picture? I want you to take what's beautiful about me and put it inside your camera."
—Cheryl, on asking Frank for a favor
"Oh, geez... I'm all dusty. What I wouldn't give for a shower about now."
—Cheryl, upon reaching the Security Room

Cheryl Jones is a survivor appearing in Dead Rising and Dead Rising: Chop Till You Drop.

She is found in Colby's Movieland during the scoop A Strange Group. She was being held captive by the True Eye cult and was locked in a storage closet.

Cut From the Same Cloth[]

Before Frank meets Cheryl in the game, Kent Swanson shows Frank a photo of a provocatively dressed Cheryl in the Entrance Plaza, introducing the photograph as his sexiest shot.

Cheryl has been captured by the True Eye cult and is locked inside of a storage closet. She is about to be sacrificed by Sean Keanan, leader of the cult, when Frank arrives to their rescue. After Sean is killed, Frank is able to open the closet where Cheryl is locked up and frees her, along with the other four hostages.

He then convinces them to follow him back to the Security Room.

After being rescued, she will wait in the room with the blue door. When Ronald Shiner complains about the lack of food, he rallies up the other survivors in the same room, including Cheryl, to head out and look for food.

If Frank does not stop Ronald's mutiny, Cheryl will leave the Security Room along with the other survivors in the same room. They will no longer count towards the number of rescued survivors.

If Cheryl is saved, she will later have a personal request for Frank. When asked about her request, Cheryl asks that Frank capture her on film. When Frank asks why, she answers that she has no idea how things will turn out and that she does not want to die without leaving an image of herself behind. She poses in a series of provocative poses while Frank photographs her.

In Infinity Mode, Cheryl appears in the Meat Processing Area from 5:00:00 to 5:07:00 and is armed with a Lipstick Prop. In her equipment she carries a Snack, 2 Lipstick Props and 2 Perfume Props. 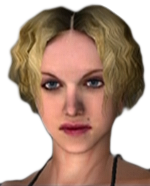 Photo of Cheryl upon rescue.

Frank and Cheryl in a car together. 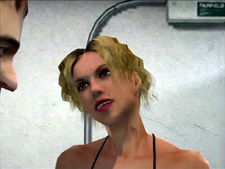 In the security room talking to Aaron Swoop. 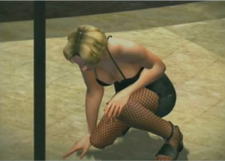 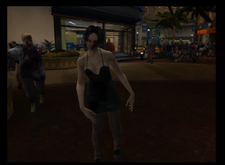 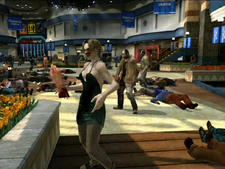 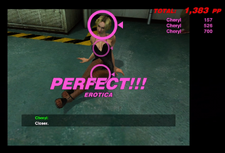 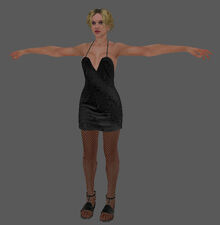