Found erecting a barricade in the Entrance Plaza.

"Hey, bring that over here!"
—Chris constructing the Barricade

Chris Hines is a victim appearing in Dead Rising and Dead Rising: Chop Till You Drop.

He was found in the Entrance Plaza of the Willamette Parkview Mall trying to help build a barricade. He was killed when Lindsay Harris removed the barricades and allowed zombies to break into the plaza.

Chris was first seen erecting a barricade at the Entrance Plaza with Freddie May and Ryan LaRosa. When Lindsay attempted to remove the barricade to rescue her dog, Chris tried to stop her, but was unable to do so.

He was killed when Lindsay let the zombies inside the plaza.

Chris appears at the Security Room from 4:07:00 to 4:19:00 carrying a melon and is armed with a fire axe. When he is killed he also drops a dumbbell, nail gun, handbag and stepladder. 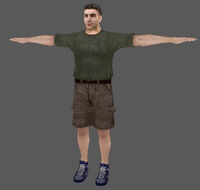 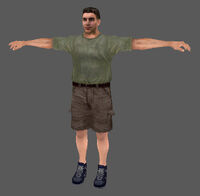