A beautiful barkeep. Trapped by Antoine in Cucina Donnacci.

"You may have saved me, but I still don't trust you..."
—Cinda, to Chuck after being rescued

Cinda Smith is a survivor in Dead Rising 2. She is held hostage by Antoine Thomas during the mission Tastes Like Chicken. She reappears in Dead Rising 2: Off the Record with the same role.

Before the zombie outbreak in Fortune City, Cinda worked at the Shoal Nightclub as a barkeep. During the outbreak, she found a way on top of Hamburger Fiefdom and hid there with a co-worker, Jasper Sanford. However, their supplies soon ran low, and Cinda decided to search for more food. While at Cucina Donnacci, she was captured and locked up in a freezer by the psychopathic Antoine Thomas.

When Chuck Greene arrives at the restaurant, Antoine mistakes him for a reporter and prepares to cook him a meal out of human flesh, using Cinda as fresh ingredients. After he realizes that Chuck is not the reporter he had been waiting for, Antoine locks Cinda up and attacks him.

After Antoine is defeated, the freezer door opens to reveal Cinda. She recognizes Chuck as the alleged perpetrator of the zombie outbreak, and refuses to follow him to the Safe House. She asks for Jasper, as he is the only person she trusts. Once she sees that Jasper is following Chuck, she will agree to trust him on Jasper's behalf and be escorted to the Safe House.

Cinda is brought back to the shelter. 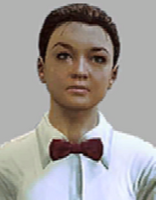