The Clown Car is a vehicle and weapon found exclusively in Dead Rising 2: Off the Record.

The Clown Car can carry up to 8 passengers, the most of any vehicle in any Dead Rising game. The Cramped Quarters achievement is awarded for doing so.

The Clown Car spawns at the following times/locations:[1] 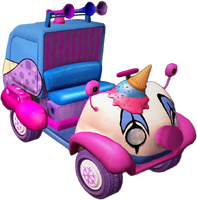