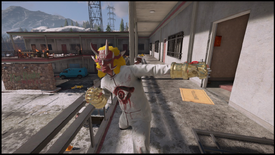 The Cult Leader (real name unknown) is one of the optional Maniac boss fights in Dead Rising 4. His weapons are the Deck the Halls .

Frank encounters him and the True Eye cult at The Peaks Motel, when the leader says a speech to a group of mannequins. He notices Frank and starts sending out the cultists onto him. After defeating him, Paula will tell Frank to not drink the "punch", as it makes people believe anything.

Retrieved from "https://deadrising.fandom.com/wiki/Cult_Leader?oldid=395906"
Community content is available under CC-BY-SA unless otherwise noted.