Almost forced into gruesome matrimony. Found in Swept Away on the Silver Strip.

"My god... Can you imagine if I actually had to marry that thing?"
—Danni when rescued

Danni Bodine is a survivor in the Dead Rising 2 mission Here Comes the Groom. She is found in Swept Away on the Silver Strip, and is forced to marry Randy Tugman. She reappears in Dead Rising 2: Off the Record with the same role.

Danni was held hostage at the Swept Away wedding chapel by Randy Tugman. She was forced to stand before Emanuel Tugman, owner of the chapel and Randy's father. Randy coerces him into marrying the couple. During the ceremony, Danni tries to run away from Randy but was physically restrained. Randy then tells her not to worry, as the other dead bride in the room did not mean anything to him. Upon seeing Chuck Greene, she and Emanuel beg him to rescue them.

After Randy is defeated, Danni sobs that this was not how she imagined her wedding day would go. She agrees to follow Chuck to the Safe House.

Danni is one of the crazed survivors Frank can fight in Sandbox Mode. She will spawn in the second floor of Royal Flush Plaza with a handgun. Once defeated she drops her weapon and $10,000. Her corpse can also be seen in the Swept Away wedding chapel, but only if Randy is active. 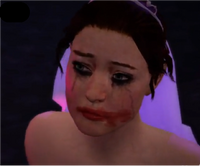 The dead bride who was killed before Danni. 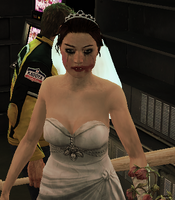 Danni is escorted to safety.

Danni is brought to the Safe House. 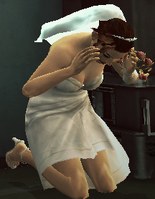 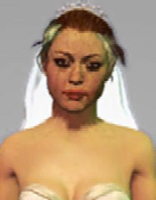 Danni is looking at the dead bride. 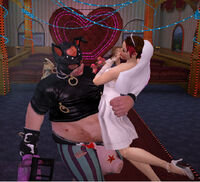 Danni is killed during Sandbox Mode.
Community content is available under CC-BY-SA unless otherwise noted.
Advertisement