Dead Rising: Chop Till You Drop

Dead Rising: Chop Till You Drop

Dead Rising: Chop Till You Drop (デッドライジング ゾンビのいけにえ Deddo Raijingu: Zombie no Ikenie) is a Nintendo Wii remake of the Xbox 360 game Dead Rising. The game follows the same storyline and setting as the original, but there are many substantial changes.

In Chop Till You Drop, the player character, Frank West, is sent on missions by fellow survivors Otis, Brad, and Jessie. The mall's security room serves as the group's base of operations and is where the missions are engaged. The missions take the player through the main plot and have them rescue the various survivors. Though at times the player is permitted to roam the mall freely without penalty, they are not permitted to do so during a mission. The effect of the missions is to provide a more structured game play experience, a significant change from Dead Rising.

In addition, the camera and photography element has been entirely removed. Books are now purchased from Cletus instead of found in the mall. Also, there are fewer items scattered around the mall that can be used as weapons.

New to the game is a completely redefined firearms element. The player may shoot guns with an over-the-shoulder view where the gun can be aimed with the Wii Remote. Firearms no longer break upon running out of bullets and ammunition pickups have been added to provide more gun-based gameplay.

Differences from the Original[]

Several mini games can be unlocked after the completion of the main story. The game was commissioned by Capcom due to the success of the Wii port of Resident Evil 4. Chop Till You Drop utilizes the same game engine partly due to this. As the graphical capabilities of the Wii are not of the Xbox 360's standards, the graphics of the game have been reduced as well as the potential number of zombies on screen at any time. This is the other reason the Resident Evil 4 system was used.

The biggest difference is the smaller size of the Mall. The Leisure Park area is reduced from the size of a few football fields down to the size of a few backyards. The rest of the mall is also smaller, although barricades have been placed in several areas to make traveling through it less quick. Also, the issue with text appearing too small to read on standard definition television screens has been corrected in the Wii-version. Multiple save slots are available as well as three difficulty settings: Easy, Normal and Hard. Blood color can be changed between red, green and a white effect. Frank cannot jump outside of a few specific areas and the photography system is also absent, as Capcom claims it would not have functioned well on the Resident Evil 4 engine.

Zombie poodles and parrots have been added, as well as zombified versions of Jo Slade, Cliff Hudson and Kent Swanson - as replacements for the originals, not supplements. Paul Carson is not present in Chop Till You Drop in any form. Cletus Samson remains as a psychopath, but is savable after defeat, in which he will sell guns, skills, and magazines to Frank afterwards. Aside from these changes, all bosses are present and remain the same with regards to strategy and abilities.

There are survivors in the game, but the number of survivors has been drastically lowered; four psychopaths aren't in the game, hence their hostages do not appear. AI systems have been enhanced so there are no "dead weights". Also, four of the unsaveable survivors originally in the entrance plaza have been removed, and none of the survivors in the entrance plaza have any health bars on them at any point in the game, making it impossible to prevent any of their deaths (whereas in the Xbox 360 version, Frank could kill the zombies surrounding the Petersons - who do not appear in Chop Till You Drop - Mark Quemada, Verlene Willis, and Dana Simms to keep them from being counted as dead).

For the missions, they are timed individually instead of having a single countdown clock for the entire story. Frank can receive a rating for each mission completed (in terms of how fast it was completed) in order to unlock new missions and rewards.

72-Hour Mode and Overtime Mode have been merged into one main game mode, and thus there are no longer multiple ending sequences (only Ending A from the original game can be achieved). Minigames are unlockable after the main storyline is completed. These minigames are Odd Jobs and Second Amendment. The game may be replayed on a New Game+ on the same difficulty, with Cletus now selling a mini blender to Frank.

Blended drinks haven't been removed, but most of their effects have been cut like fast movement for Quickstep. There are white, green, orange, and blue blended drinks. Orange acts like a green herb from Resident Evil 4, with Green acting like two combined green herbs. White increases Frank's max health as well as fully healing him, like a green herb, red herb, and yellow herb combined. And blue gives Frank a random ability, ranging from a full heal, lowering his health to very little HP (essentially an insta-kill without healing items), making him run faster, giving him a temporary real mega buster and mega man outfit, to giving him better damage. Making Frank run faster gives him a weird blue aura, and giving him higher damage gives him an orange aura. These effects are limited however.

The game places a greater emphasis on guns as only one melee weapon or handheld item (such as skateboards) can be held at any time. All food, drink, guns, books and non-melee/handheld items are managed through the Pause menu as well as the normal map, Case File, and notebook from the original game. Some of Frank's special abilities have been changed to combat events which can only be used in psychopath battles. Frank cannot drive cars around Leisure Park. Frank starts out with the same number of inventory slots and certain "multiples items" can be held in the same slot, such as ammo.

The game's cutscenes are copied directly from the original, but subtitles cannot be toggled to off, and changing Frank West's outfit does not affect his appearance in the cutscenes, due to the fact that the scenes are pre-rendered. 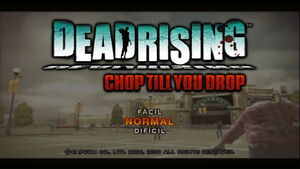 In order to advertise and promote Dead Rising: Chop Till You Drop, Capcom animated a music video with Gagaga SP performing a song called "Dead Rising". It has the appearances of various Dead Rising characters. The video's vocals are in Japanese with English subtitles present on screen. The gore in this video is censored. The video can be seen here on YouTube.

On July 15, 2008, Famitsu magazine revealed that Dead Rising was being ported to the Wii console to be released on February 24, 2009; the port name was later revealed to be Dead Rising: Chop Till You Drop (Dead Rising: Zombie no Ikenie in Japan).[3] Capcom decided to port over the game after the Wii port of Resident Evil 4 was critically and commercially well received.

The game uses a modified version of the Resident Evil 4 Wii engine (itself a modified version of the RE4 GameCube engine), instead of Capcom's in-house MT Framework engine used for PlayStation 3, Xbox 360, and PC titles. Producer Minoru Nakai explained that the game was "not really a port so much as it is a remake. We made it from the ground up -- from scratch -- basically saying, "This is what we had in the 360 version, and this is what we want to do, so we're just going to remake it from scratch."[4]

Nakai further explained that the voice was ported from the original and stayed the same. "But things like polygons ... the Wii can't handle as many polygons, so we took the models from the 360 version and we reduced the polygon count and things like that, and we were able to recycle and reuse them that way." There was no automated process to reduce the models, instead designer and programmers had to go in by hand manually reduce all of the models.[4]

Producer Minoru Nakai explained that Capcom really wanted to make the game more for the casual users. For example, the game adds a difficulty level of easy, medium or hard.[4]

The game is published by THQ in Australia.[5] Capcom announced that they expect to sell 500,000 copies of the Wii version.[6]

Chop Till You Drop has received mixed reviews and has an aggregate score of 61/100 on Metacritic. X-Play gave the game 2 out of 5 stars, saying that there were not enough zombies, and some enemies are extremely annoying, as well as criticizing some poor control choices, the removal of the photo-taking system, and the lame assortment of mini games. They did praise the Wii Remote aiming for ranged weapons, calling it a vast improvement on the aiming in the Xbox 360 version.

IGN gave the game a 6.9/10, and criticized the graphics saying: "Obviously, Dead Rising had to take a hit in the transition from 360 to Wii. But this is not even good looking for the Wii, really." and also said: "The story and dialogue are wretched, and a key feature (the ability to take photographs) has been inexplicably removed." GameSpot gave the game a 6.5/10, praising the gunplay saying it's "easy but satisfying" and "Same zombie-bashing fun as the original", but criticized the fetch missions saying they "get old quickly".

Chop Till You Drop

Cletus acting as a gun shop

Secret lil thing, if anyone could put a video link of zombie kent, jo, or cliff. i would be glad.