Dead Rising: Road to Fortune is a four-issue, full-color comic book mini-series published jointly by IDW Publishing and Capcom. "Road To Fortune" was first officially announced by IDW and Capcom in July, 2011 at the San Diego Comic-Con.[1]

The events depicted in RTF bridge the gap in the plot between the Willamette Incident and the beginning of Case West and are considered "official canon" within the Dead Rising Universe. This Comic Serves as a bridge between the events of Dead Rising and Dead Rising 2: Case Zero. 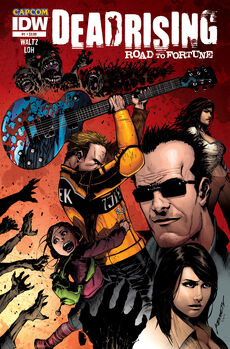 Dead Rising: Road to Fortune #1 is the first of the four comic books. It is 22 pages in full color. It shows Frank right after the events of Dead Rising, then him 2 years later talking to his agent, and Chuck heading to Vegas with his family. there is 10 pages of escaping Willamette, 9 pages of Frank walking around his house and talking to his agent, and three pages of Chuck's family.

At the end of Dead Rising, Frank and Isabela are attempting to flee the Willamette Incident in a Humvee. Brock Mason, the leader of the Special Forces attacks them with a XML Prototype Tank. While Frank drives the Humvee, Isabela Keyes operates the mounted heavy machine gun on the vehicle, eventually destroying the tank's automatic system. Brock switches the tank to manual control mode and quickly rams the Humvee, causing it to tip over on its side. Isabela is knocked unconscious while Frank stumbles out. Frank knocks Brock off atop the tank, as large hordes of zombies surround the tank, separating Frank from Isabela. As Road to Fortune begins, Frank sits on the tank after Dead Rising, telling himself he is not going to die here. Isabella yells for his help, so Frank gets up and opens the tank. He finds a Machine gun  and starts shooting the zombies, and he and Isabella make their way across the construction site. In the sky is a helicopter that is about to land. Frank and Isabella continue to mow through the undead, until the guns runs out of ammo. With the zombies still blocking the only way out, Frank fires an RPG and clears the path. As the chopper lands ahead, Frank and Isabella prepare to take it and get out of Willamette, but then Isabella turns and starts eating Frank alive.

Frank awakes at his home in Hubbard Gulch, Nevada two years later. The last part of his dream wasn't real, Isabella is still alive and they did escape. There is alcohol all over the place, and Frank looks more miserable and older. He takes his medicine (Zombrex) and heads over to the kitchen, where he finds out on the radio that reports of a small outbreak about 50 miles outside Las Vegas has occurred. Rebecca Chang, who is a radio reporter covering the story, talks about how this is not the first time this has happened and she believes this it is a Government conspiracy. Frank then calls his agent, Clay Hurlton to talk about having Rebecca on his show, "Uncovered", but his agent informs him that the network is canceling his show. Now surprised, Frank asks why. His agent explains the ratings have gone down, and they can't afford to produce the show anymore. Now enraged, Frank explains he will not give up his show without a fight. His agent replies that it is not his show, and it never was. He was just the host, and it was the network's show, proclaiming: "You were just the small time host of a fringe talk show paid for and owned by the network, the same network that's now decided to replace you with real reality TV." Frank, now as angry as ever, screams into the phone: "REAL REALITY?! YOU WANNA KNOW WHAT REAL REALITY IS, YOU SMUG SUNUVABITCH?! TERROR IS REALITY, THAT'S WHAT!" before hanging up on him. His agent sits there for a moment, then smiles and calls Tyrone King. He tells TK that he has a new idea for a show called Terror is Reality, and TK can host it. Back at Frank's home, he calls KDED news and says he needs to talk to Rebecca Chang.

Chuck Greene is riding to Vegas with his family, Pam Greene and Katey Greene for a motocross competition. Pam tells Chuck that she doesn't think this is a good idea because of the outbreaks happening around Vegas. Chuck reassures Pam that there isn't anything to worry about, and just to think about all the money he will win her and Katey tonight. Then he proclaims that tonight, their lives are going to change like you won't believe, foreshadowing the inevitable outbreak that will occur. 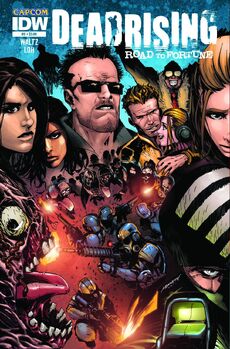 A group of Special Forces Soldiers attempt to exterminate the infected residents of the quarantined town of Coyote Springs. Meanwhile, outside of the quarantine, Rebecca Chang presses the guards for more information.[3] Rebecca is approached by Captain John Kilduff and is told to leave. Rebecca then receives a call from Frank West asking to meet with her. While she is on the phone Stacey approaches the blockade, leading a group of CURE protesters.

In Hubbard Gulch, Nevada, Frank meets with Rebecca at Tony LongBean's Dining House. Rebecca explains how Curnow had not shown up to disseminate the information to her. Frank then reminisces about how, fleeing Willamette Mall, Isabela Keyes was immediately arrested by Homeland Security when their helicopter landed. Frank was threatened by Homeland Security Agent Cornell that if he interfered with the arrest he would be prosecuted, otherwise he would leave unprosecuted, he would leave a hero. Frank chose not to interfere and Frank has not seen Isabella since then. Frank wants to get "back in the game". He believes that all of the outbreaks are not caused by Carlito's Orphans, but by the US government. Rebecca shares the same suspicion, but she thinks Phenotrans has a part in the outbreaks, which Frank dismisses as "conspiratorial".

In Still Creek, Nevada, the Phenotrans convoy to Las Vegas stops at Brockett Gas Station. Harjit throws a bottle of Queens out the window, as the convoy continues on. 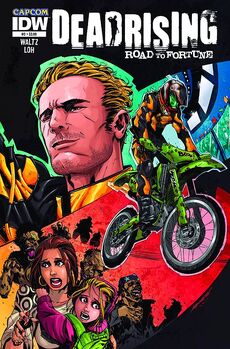 Synopsis: Phenotrans has launched its diabolical plot against Las Vegas and all hell has broken loose. Chuck Greene and his family desperately try to escape to safety while Frank West and Rebecca Chang dig deeper into the zombie conspiracy.[4]

The comic starts with two women dancing. Those women are revealed to be zombies on a large arena video screen above the heavy metal band Stygian Dreamz. Below the video screen, the contestants for the Las Vegas 250 motocross race are getting ready to race in the arena, including Chuck Greene. He gives his wife Pam one last kiss and gets on his motorcycle. Meanwhile, Clay Hurlton is talking to TK on the phone. He tells him to hurry up and get to the arena, because the race is starting. Harjit Singh is standing on the sidelines with some Phenotrans guards. As the race starts, they each drop a case of queens. Harjit smirks as the announcer says: "The craziness has just begun folks!"

As Chuck begins to take the lead, a queen flies into Pam's neck. She dismisses it as a bee sting and continues to watch Chuck. Meanwhile, Harjit and the rest of the Phenotrans agents get in their trucks and leave the city. People in the stands start to show signs of zombification, including yelling and throwing up. Clay is still on the phone with TK urging him to hurry up, but then Clay sees the arena filled with zombies. The Las Vegas outbreak starts. He informs TK of the situation and then TK quickly has the driver in his limo turn around and leave the city. Just then, a zombie grabs Clay from behind and kills him. As Chuck wins the race, he takes off his helmet only to find the arena is full of the undead. He races through the hords as Pam and Katey cry for help. When he gets there, he seems to be relieved until Pam lifts her head and reveals that she is undead. She bites Katey in her right arm and is about to bite her again, but Chuck kills her by sticking a screwdriver in her head. Now very depressed and upset, Chuck grabs Katey and they ride out of the arena to search for medicine. 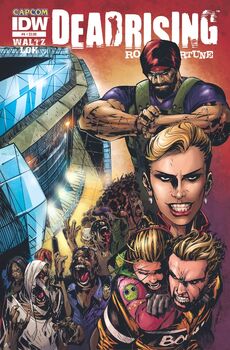 Synopsis: Las Vegas has been fully infected and Chuck Greene and his daughter Katey run for their lives trying to escape the rampaging zombie horde. Meanwhile, Frank West and Rebecca Chang continue to dig deeper for answers into Phenotrans' suspected involvement in the zombie outbreak.

Chuck and Katey escape the infested arena and get into Chuck's truck, only to find that Las Vegas has been overrun. Katey quickly needs a dose of Zombrex, so Chuck plows through tons of zombies, and eventually locates the Waltz-Green Pharmacy. There, he finds Zombrex and gives Katey a dose. Meanwhile, Frank and Rebecca attempt to get into Vegas, but Captain Kilduff stops them, and also mentions to Frank that he was a friend of Brock Mason. After he insults Rebecca, Frank is angered and remarks that Brock was weak and he 'Punched like a little girl'. Angered, Kilduff starts shouting slurs, along with Frank. Rebecca eventually pulls Frank away, leaving Kilduff, still angered, shouting 'SOMEDAY WEST...SOMEDAY.' Once they get away from Kilduff, Frank shows Rebecca a text he got from an unknown person saying Phenotrans has secret plans and he/she will say more soon, which eventually triggers the events of Case West. Before Chuck and Katey leave, Chuck wraps her in his yellow jacket. Rebecca begins her speech from Case Zero while Frank takes pictures. Chuck and Katey escape Las Vegas while Marion Mallon and Harjit Singh discuss their future plans. The comic series (and issue itself) ends as Marion says, 'Who can stop us?' while showing Chuck driving into Still Creek, hinting that Chuck will stop them. This ending leads to the start of Case Zero.

There is an explanation of:

Chuck and Frank never meet each other. In addition, readers learn more about Phenotrans. There are also some very unique and interior rigged weapons.[5]

Each issue of "Road To Fortune" was released in physical and digital formats simultaneously:

Each issue is 32 pages full color. A couple of months after all four issues is released all four books will be combined and sold as a full trade, with a lot of extras, maybe new artwork, maybe new cover art.[1][5]

The comic book begins with Frank on a tank at the end of Dead Rising and shows how he escapes Willamette. Later Frank's career takes a weird turn and ultimately collapses.[5]

Capcom came to IDW with the idea of a comic book based on the game. IDW wanted to make sure to do a comic about something that the fans have never seen, so they looked at the available canon, and also saw that fans on forums had asked what had happened when Frank was on the tank, with the zombies closing in at the end of Dead Rising. IDW decided to show this tank scene and explain what happens to Frank on the tank after the credits roll in Dead Rising and how Frank escaped.[5]

Attendees at the 2011 Comic-Con in San Diego got a first look at the comic and meet author Waltz.[8]

Retrieved from "https://deadrising.fandom.com/wiki/Dead_Rising:_Road_to_Fortune?oldid=393343"
Community content is available under CC-BY-SA unless otherwise noted.