Dead Rising 2: Case Zero is an exclusive downloadable game for Xbox Live Arcade, released on August 31, 2010 in North America and Europe. The game's release in Japan was late, due to concern about the game's content.[1]

The game costs $4.99 on the Xbox Live Marketplace and bridges the link between the events of the first Dead Rising and Dead Rising 2. It is one hour long, equivalent to 12 hours in Dead Rising time. In February 2014, the game became free to download for users with an Xbox Live Gold Membership for the month.

Case Zero takes place over a 12-hour (in game) period. There is no other mode available.

Acting as a prologue to Dead Rising 2, Chuck Greene flees Las Vegas with his daughter Katey after an outbreak occurs, his wife dying at some point during it. In need of fuel and looking to stock up on supplies, Chuck and Katey stop at the gas station in the small desert town of Still Creek. After giving Katey a dose of Zombrex, Chuck has a look around town after hearing an explosion. Hearing screams and gunfire, he looks outside to see a large plume of smoke over the containment zone further down the road. Then someone steals Chuck’s truck, leaving the two stranded, just as zombies begin to infest the town. They take shelter in the gas station and barricade the entrance. With Katey needing a shot of Zombrex very soon, Chuck searches Still Creek for the drug and a way out of town.

After traveling through the small town, Chuck then discovers a road block with an overturned ambulance, which has Zombrex inside. During his search for Zombrex, he overhears a broadcast from a dead soldier's radio, saying that a backup quarantine crew will arrive at Still Creek by 9 PM. Chuck finds a motorbike, which he determines can be repaired. Loading it up on a trash cart, He takes the motorbike back to the gas station. Chuck examines the motorbike and determines that he will need five parts to repair the bike. As he searches town for the bike parts, he finds a handful of survivors in need of assistance, including the local pawnshop owner, who offers to sell his wares when rescued, including a spare wheel. Chuck meets Jason Wong and Archie Eaton fending off zombies behind the Department Store, with Jason giving Chuck the handle bar he uses for a weapon. After collecting all five parts of the bike, he repairs the bike just in time to give his daughter a dose of Zombrex.

As Chuck and his daughter are driving along the desert road, they come upon the stolen truck, and the thief dead in the driver's seat. Chuck collects their belongings and his motorcross jacket. He puts on the jacket, then gets back on the motorbike, and they ride away.

Chuck Greene spends up to 14 hours (70 minutes real time), rescuing other survivors of the zombie outbreak, attempting to get Zombrex for his daughter Katey and finding a way to escape Still Creek before the military arrives.

Win Some Lose Some[3]

Handle With Care
Zombrex 1
Above The Law[4]

Notification of time until military arrives[]

After finishing Case 0-2: Find Zombrex, every time Chuck leaves the safe house, he will be reminded how much time until the military arrives.

There are 6 possible endings that the player can achieve in Case Zero. The final ending will reflect on Chuck's actions during his stay in Still Creek.

There are six possible endings with three possible cut-scenes.[5]

CBS News stated, "For a sequel to a four-year-old game, Dead Rising 2: Case Zero is surprisingly lacking in innovation. With the lack of either offline or online co-op, we also don't get a chance to try out Dead Rising 2's other major selling point as well, which diminishes Case Zero's overall re-playability value...And by the time Dead Rising 2 hits stores, you'll likely never play Case Zero again. The story is a bit of a throwaway in the grand scheme of things, so you will not be missing out if you choose to skip this one, but if you've been itching to get your hands on some third-person zombie action right now and cannot wait for the full release, then Dead Rising 2: Case Zero is a great little slice of just exactly what you're looking for."[19] 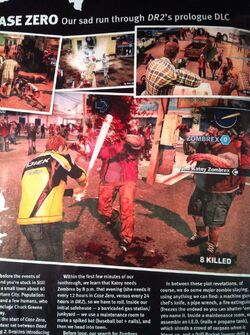 "Oh, yeah, I also managed to jack myself an xbox and downloaded me some Dead rising 2 Case Zero, which is kind of a backstory for Chuck Greene (the dude what caused the outbreak). they pumped that one out pretty quickly. almost seems like an exploitation of chuck………a Chuxploitation, Lol! still, i’m not complaining. if there’s any way to relax after killing ome zombies in real life, it’s killing them in virtual life. LOL."[20] 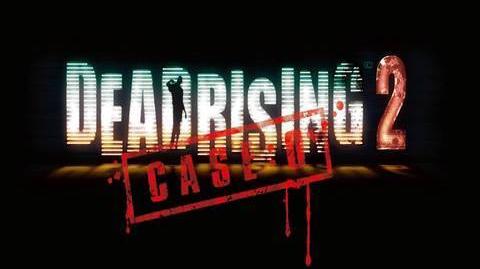 A view of the empty main street of Still Creek

The inside of the Brockett Garage