Ending A shows Chuck and Katey successful in their escape from Still Creek after avoiding the military personnel ordering them to remain where they were or be shot for resisting. They later come across their stolen truck with the thief dead inside. Chuck retrieves their belongings, including the Zombrex and his signature yellow jacket before continuing to Fortune City.

Endings B, C, D and E end in Katey being taken away from Chuck by the military personnel while others restrain Chuck and knock him unconscious.

Ending F has two short cut-scenes which are dependent upon where Chuck is when Katey is zombified.

If Chuck is outside the Brockett Gas Station safe house the cut scene:

If Chuck is inside the Brockett Gas Station safe house garage the cut scene:

Chuck drops to his knees, pounding his fist on the ground. 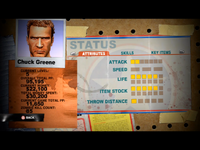 Map of all locks in Still Creek.
Community content is available under CC-BY-SA unless otherwise noted.