In certain locations in the Dead Rising 2 games, Chuck Greene or Frank can find blenders. Combine two food items in the blender and Chuck will get a special type of juice back.[1] There are nine varieties of Juices, and each has a "special" or "power-up" effect on Chuck or Frank. These effects range from useful effects such as making Chuck temporarily invincible to oddball abilities, such as allowing Chuck to spit fire (Spitfire). All of these Juices restore 6 health in addition to providing certain effects, and Chuck can use any of these created juices again as an ingredient in the Blender to make another type of juice.[2]

In the PC game files, all the possible recipes are found in the combostation_juices.csv file. 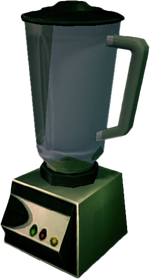 How to mix two items in a blenderEdit

In order to mix two items together in a blender Chuck must first switch items in his inventory until he gets to the first ingredient. With the ingredient in hand go to the blender, and when the yellow indicator is highlighted and tells you to "Examine" the blender. This puts Chuck's first item in the blender. Chuck cannot get the item back out once he puts it in.

To add the second food item switch to the food item and Examine the blender again.

The blender will whirl, then spit out a colored thermos-looking container. The color is indicative of the Juice Chuck made, and it will have the name in parenthesis when Chuck walks close enough to it.

Chuck can use two drinks at the same time.

Retrieved from "https://deadrising.fandom.com/wiki/Dead_Rising_2_Recipes?oldid=390696"
Community content is available under CC-BY-SA unless otherwise noted.