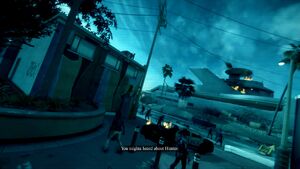 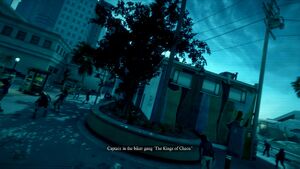 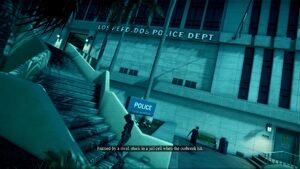 "Hunter got his revenge all right, and ended up top dog in the gang. But when you live like Hunter does, it's hard to stay on top for long."
—Jamie Flynt

Dead Rising 3: Chaos Rising is the third of four $9.99 downloadable content packs available for Dead Rising 3, and part of the Season Pass. It includes "new playable characters, missions, weapons, and more". It was released on February 25th, 2014.

"You mighta heard about Hunter. Captain of the biker gang "The Kings of Chaos." Framed by a rival, stuck in a jail cell when the outbreak hit. Lucky for him, opportunity came around and gave him another shot......at payback."
—Jamie Flynt

Chaos Rising follows the story of Hunter Thibodeaux, the leader of the biker gang and the first required psychopath, who is on a quest for revenge against another biker member.

Hunter was second in command of the biker gang he was a member of, until he was framed by another member, arrested, and jailed. The episode begins with Hunter sitting in jail. He manages to lure a police zombie holding the keys to his cell. Hunter dismembowels the zombie and takes the keys, unlocking his cell and setting himself free. After unlocking the cell, he must find the keys to unlock the police station, which can be found on the third floor of the station. After picking up the police station key, Hunter can exit the station through the parking garage, leaving in a stolen police car.

Hunter's first objective is to meet his friend Torque at the Production Bridge to gather information. When he arrives, however, he finds a man named Spider instead. Spider tells Hunter that Torque is no longer in charge, and that he's taken over. If Hunter is to gain an audience with Spider, he must bring back some special reserve whiskey from El Spanol Liquor in Sunset Hills. Once the whiskey has been retrieved, it can be brought back to Spider who will then let Hunter inside.

Once inside, Spider is standing with his three captains: Razorface, Cannons and Snake. The four of them watch as Hunter is double crossed and attacked by biker gang members. After Hunter defeats a few gang members, Spider shoots Hunter and orders his captains to dispose of his body. Hunter manages to live through the attack, however, and wakes up in a construction bin near the House Under Construction in Sunset Hills. Still determined to find his friend Torque, Hunter goes to find him at Ironside Motorbikes.

Hunter meets Torque at the bike shop. Torque seems to have some sort of plan up his sleeve, and asks that Hunter grab him a two motorcycles and a sports bike so that the can make Hunter a "proper ride". Once the bikes have been collected, Torque will ask Hunter to go and grab something from Central Storage while he starts building.

When Hunter returns, he and Torque devise a plan to take out Spider's captains in order to draw him out. Cannons can be found in Warehouse A-119 in South Almuda, Snake is hiding at the Lee-Amies Estates in Ingleton and Razorface is at the Mayor's Mansion in Sunset Hills. When killed, each will drop a ring that Hunter will need to pick up. With all three defeated, Hunter returns to Torque, only to find that he has been left to die by Spider. Torque tells Hunter about a surprise that he left him at Shavey's Garage before dying. Hunter burns his friend's body and changes into a biker's outfit before heading out again.

Hunter finds Spider at the Production Bridge and the two decide to settle things, once and for all. Spider serves as the final boss for the episode. After Spider's defeat in hand-to-hand combat, Hunter finishes him off by stabbing a bowie knife through his neck. With Spider dead, Hunter becomes the new head of the gang and once again gains the support of the bikers. This is short lived however, as Nick Ramos and Rhonda Kreske enter the area only moments later, which eventually leads to Hunter's death. 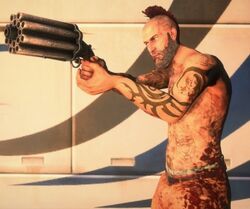 Hunter with the Hand Cannon. 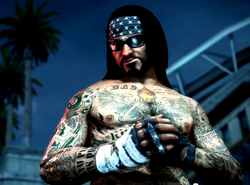 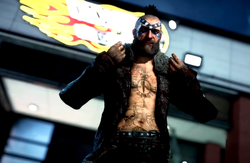 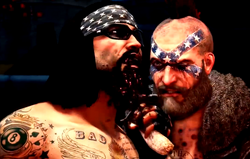 Retrieved from "https://deadrising.fandom.com/wiki/Dead_Rising_3:_Chaos_Rising?oldid=392243"
Community content is available under CC-BY-SA unless otherwise noted.