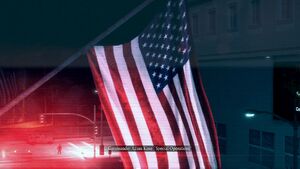 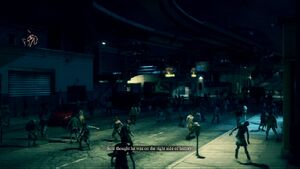 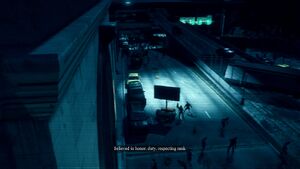 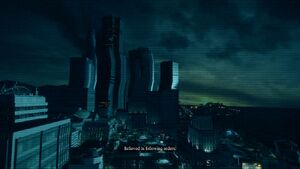 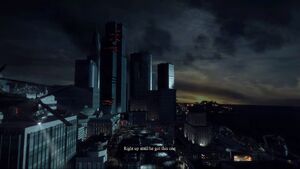 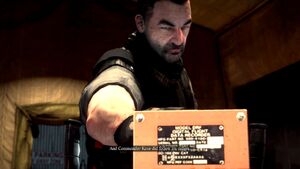 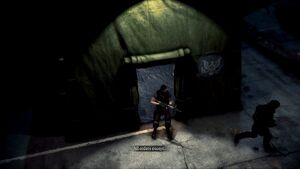 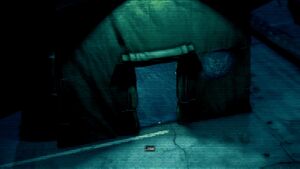 "And Commander Kane did follow his orders. All orders except......one."
—Jamie Flynt

"Commander Adam Kane, "Special Operations." Sure thought he was on the right side of history. Believed in honor, duty, respecting rank. Believed in following orders. Right up until he got this one."
—Jamie Flynt

Episode 1 focuses on Adam Kane, a commander of the military who has had his troops sent into Los Perdidos by General Hemlock to kill the President for going too soft on the Illegals.

As they ride into the city in a helicopter, they are forced to evacuate when their chopper is hit by a rocket fired by Clyde and Mel. Kane lands on the ground near the Los Perdidos River, and must find the site of the helicopter crash to retrieve the data stored in the black box.

The helicopter is a flaming mess when Kane finds it crashed in Ingleton. Kane must retrieve the flight data recorder and the larvae container from the crash site. With the larvae in hand, Kane's next orders are to use the larvae to cleanse the Ingleton Motel of any illegals. Afterwards, Kane is directed towards the Ingleton Taxi Company where the military plans to set up base.

When he arrives, Kane must clear out the base so that the site can be safely used. Once all of the zombies have been killed, backup can be signaled by firing a flare from the rooftop. Bravo team will come in and cover the base while Kane goes to retrieve supplies for Charlie Company. At the Huge Industrial Co. warehouse, Kane will find most of the members of Charlie deceased. He rides their supply tank, the Armadillo back to the taxi company.

As he nears the location, a radio message will come in saying that the President is using the Mayor's Mansion as a stronghold. The area has been barricaded and fortified. Using the back entrance, the mansion can be entered. After defeating all of the President's security, she can be secured and brought back to the compound.

A short glimpse of Nick Ramos is seen as Kane is returning to the base. He has been given his final orders - to destroy the black box that was on the chopper. Before he has a chance to, a soldier brings in the zombified president. Kane shoots her before she is able to turn the soldier, and orders that she be removed from the premises afterwards. He then radios over to report that he had destroyed the black box, but in actuality, he only pretended to. A soldier comes in to inform Kane that somebody (Nick) has breached the facility and is trying to free the captives. 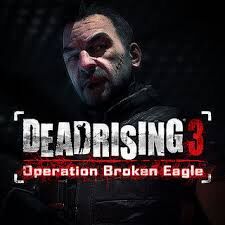 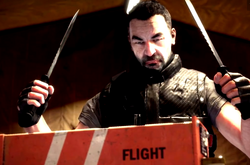 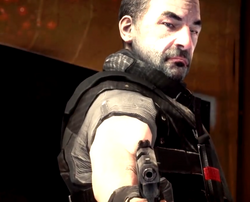 Retrieved from "https://deadrising.fandom.com/wiki/Dead_Rising_3:_Operation_Broken_Eagle?oldid=389331"
Community content is available under CC-BY-SA unless otherwise noted.