During the course of Dead Rising 3, Nick will come across psychopaths, survivors of the outbreak that have either gone mad as a result of their failure to cope with the situation, or are morally bankrupt individuals who view the epidemic as an open opportunity to indulge themselves in their twisted desires.

The are seven psychopaths in the game who represent the seven deadly sins. These psychopaths are non-main story enemies that can be found in the open world, and can be tackled non-linearly, or not at all.[1]

These seven psychopaths are in cahoots with one another.[2]

Lust is symbolized by Dylan Fuentes, a perverse S&M performer, who is fought in an S&M dungeon in the back of a porn store. He uses a Lust Cannon, a specialized flamethrower (which is in the shape of male genitalia) as his weapon. When Nick enters, he finds two survivors, Eric and Julia, tied to chairs. He trips over on a wire, and Dylan asks him to perform sexual acts for him, but Nick refuses. Dylan says he won't let them go until Nick is 'more obedient' and blasts his Lust Cannon into the air. Nick tells him to calm down, but Dylan only laughs sinisterly. After his defeat, he laughs and falls to the floor. Gas shoots from his Lust Cannon (resembling male ejaculation) before he dies, smiling. After that, Nick can rescue Eric and Julia.

Gluttony is symbolized by Darlene Fleischermacher, an overweight woman who travels on a electric mobility scooter who is tired of taking low-carb diets, and uses the outbreak to gorge herself in the local buffet. Nick enters the buffet, finding a survivor named Nathan who was trying to get into the kitchen, and slips on a puddle of vomit. Darlene hears them, and tells them to get away from 'her' food. When Nathan tries to eat some of the food, Darlene stabs him to death with a large spork, and attacks Nick when she thinks he called her 'fat'. When defeated she makes one final attempt at killing Nick, but her scooter slides on her own vomit which causes her scooter to fall backward. Darlene then vomits, but with no way to get up, chokes to death on a combination of vomit and blood. 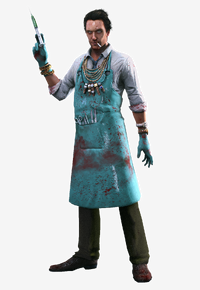 Greed is symbolized by Albert Contiello, an underground surgeon. When Nick enters his "lair" Albert sneaks up behind him and injects him with a needle. Nick wakes up to see Albert injecting Alejandra, another survivor. Nick reacts to this by getting up, and stumbles into a pile of organ boxes which sends Albert into a rant about profitable opportunity on selling human organs. Nick starts to hallucinate Alejandra becoming another Albert and the fight begins.

During the fight, Albert will attempt to operate on survivors in linked rooms. The tactic is to stop Albert from killing the survivors and throw organ boxes onto the floor which triggers a context sensitive of him being stabbed by his own syringe in which Nick briefly passes out after the effort.

After his defeat, and being injected by the needle, Albert sees zombies attacking him. Nick watches as Albert disembowels himself with his surgical saw in reaction of being disemboweled by zombies.

Albert is the only one of the seven psychopaths who is part of the main storyline.

Sloth is symbolized by Theodore Lagerfeld Jr. He is the lazy obese son of the mayor of Los Perdidos, who sits in a panic room playing video games, only emphasizing how unconcerned he was about the zombie outbreak that he didn't even know was happening. When Nick enters his mansion, Theodore appears on a large screen asking if Nick is from 'the service' and then for Nick to go to the store for batteries and a bag of chips. Nick asks for a key to the armory, but Theodore, too lazy to give it to him, instead sends armed RC helicopters to drive Nick away. The goal is to find Theodores panic room in his mansion and confront him. When confronted at last Theodore has a heart attack and defecates.

Wrath is symbolized by Harry 'Zhi' Wong, a blood-stained monk meditating at the Zen Gardens. When Nick enters the area, he sees many dead bodies on the floor. Nick finally realizes that the bodies aren't zombies, but actually survivors that have become victims to Zhi from disturbing his peace. Zhi becomes enraged and attacks when a zombie accidentally walks into a gong. He fights with a Guan Dao. After his defeat, Zhi laments about how he was fired, his wife had left him for a refrigerator salesman, and his kids had turned into 'dis-respectful brats'. He shortly after decapitates himself with his Guan Dao to finally find peace from the universe he accused for slaughtering his happiness.

He is the first psychopath in the game.

Envy is symbolized by Kenny Dermot, a stereotypical nerd. You first meet him at a construction site; he is scared of the zombies and asks for Nick's help (also in part to build up his self esteem). After killing five zombies unarmed, he says that he will become strong and a hero just like Nick.

When meeting him again aboard a yacht, Nick notices Regina, a tied-up survivor being attacked by a zombie and kills it. This is believed to be a stunt, perpetrated by Kenny. Kenny returns with a new name: Kick. He has become insanely jealous of Nick's heroic attempts, and attempted to be a copy of Nick by trying to save a person, dressing in a mechanics suit, and creating his own combo weapon, a Junk Ball. When defeated, Kenny will become surrounded by zombies and pleads for Nick to save him, and if saved, he'll settle for being Nicks sidekick.

He is a savable survivor.

Pride is symbolized by Jherii Gallo, a female bodybuilder, determined not to let anything get in the way of her winning a bodybuilding competition. You meet her at the Yoh-Gah Gym and she becomes enraged when Nick calls her a man accidentally twice. She fights using a barbell. When defeated she is crushed by a trophy stand after repeating her motivational mantra. Nick mockingly flexes his muscles at her death.

Retrieved from "https://deadrising.fandom.com/wiki/Dead_Rising_3_Psychopaths?oldid=389460"
Community content is available under CC-BY-SA unless otherwise noted.