Dead Rising Mobile is a game for the Apple iPhone/iPad, announced on October 4, 2010 and given to IGN for trial testing.[1] It was released on December 9, 2010 for around $6.99.[2] The amount of weapons is relatively the same,[1] with specific sound effects per weapon.

The game can be played with either Frank, Brad, Carlito or Jessie, using a small control pad in the corner of the screen to move and execute some of the skills. Weapons are found in different areas of the game and can be used after being equipped by pressing the button. If the attack button has 2 circles around it, then holding down the button will cause the player to use the special attack of the weapon. Skills are acquired through books that you get with every few levels up, that must be equipped to a special Book Slot screen. Saving is done in special doors marked with an S. When going to one of those doors, a "Box Menu" opens where the player can see what missions he can do, if there are any people that need reviving, or to save. There is a new hunger meter. If Frank doesn’t eat, he will start slowly losing health. There is also a new class of zombies, called Mad Zombies. These zombies are stronger than normal, and do much more damage.

If Frank dies, the player can send a request for help on Twitter or Facebook. If another player sees the request, they can go into the game and revive the player. But if nobody sees the players request then the player doesn’t get revived, and he loses all of his items and whatever level Frank has acquired.[3]

The October 4, 2010 IGN review stated the game is still in its early stages. It had flashing textures, or invisible zombies. Movement and rotation will be controlled by the same part of the screen and there are 2 attack buttons on the opposite side of the screen, that give options to different commands.

In 2008, Capcom Interactive Canada released a spin-off of Dead Rising for mobile phones. The game stays true to the sandbox design and plot of the Xbox 360 version, despite being pared down for the smaller screen and platform.

Critics reviews of the iPhone app was generally negative. IGN rated the game as "painful" with a 2.5 out of 10.[1] Another critic gave the game a 7 out of 10 stating, "Graphically, the game is certainly impressive. However, there are definite problems involving pop-up."[6] Another reviewer said the game lags really badly and the controls are the biggest problem with Dead Rising Mobile, which are really clunky. The thumbstick to move is very inaccurate.[3] Slide to Play complained, "In the console game...missions include[d] fighting crazed humans, escorting survivors, and uncovering the details of the zombie outbreak. All of that is gone from Dead Rising Mobile, and instead Frank becomes an errand boy who has to complete pointless tasks. These include killing scores of zombies, of course, but also finding lottery tickets, hamburger coupons, and lost shoes and earrings. In other words, absolutely nothing that would help any rational survivor."[7] 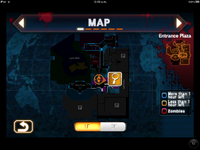 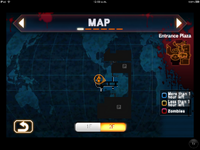 Retrieved from "https://deadrising.fandom.com/wiki/Dead_Rising_Mobile?oldid=391605"
Community content is available under CC-BY-SA unless otherwise noted.