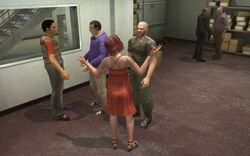 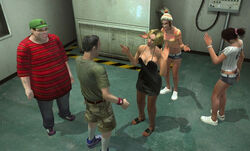 The survivors in Dead Rising are any characters that, when encountered, have not met their fates at the hands of the zombies. Most are characters Frank West can find in various places of the mall at certain times. Others are psychopaths, or survivors who take advantage of the incident to commit amoral acts or simply snapped and were driven to insanity due to the outbreak. Some survivors are unsavable or victims of such psychopaths and cannot be saved by Frank.

There are 88 survivors (excluding cult members and soldiers) in all, psychopath, savable & unsavable alike, though only 78 are marked in the notebook.

The citizens of Willamette who were not initially killed or rendered undead by the zombie outbreak are referred to as "survivors." Many survivors can be escorted safely to the Security Room, and will often provide Frank with competent cover if given firearms or other weapons; others may be injured, cowardly, traumatized, hostages, or even drunk, requiring Frank to lead them directly to the exit point and possibly rendering him unable to use his weapons.

Otis will periodically update Frank with information on certain survivors and their locations, though some survivors must be found without assistance. Certain scoops or "unannounced" survivors are time-sensitive: if Frank takes too long to begin a scoop their health will decrease, and in some cases of large rescues from certain psychopaths they may die off one by one. Successful rescues will earn PP for Frank; Frank may also choose to leave the survivors to die, or kill them himself. 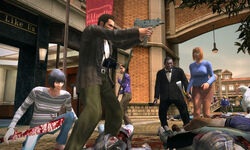 These survivors can walk and be equipped with weapons. They are the most common of the survivor types. Most males and some females are in this category. While escorting a group, they are much more reliable, since they can defend the group at waypoints so long as they're armed. They are more difficult to escort than other survivors if they're alone since you have to depend on their AI to navigate through zombies.

Most women that can equip weapons can only equip light weapons such as knives, submachine guns, handguns, etc. They also have a unique running animation that is slightly slower than males, causing Frank to have to wait for them to catch up. They also use an unarmed fighting style, like unequippable survivors. There are a few female survivors that do not use this AI system (or can at least equip heavier weapons): Beth Shrake, Barbara Patterson, Kay Nelson, and Debbie Willett.

These survivors are too afraid or incompetent with weapons, but can be led around by the hand directly. All are female. They are good with group escorts since they are able to keep up on foot, with the exception of Susan Walsh. They are also easy for solo escorting, since they can be guided directly by hand.

Like normal female survivors, they use an unarmed fighting style that consists of shoving zombies, which causes them to fall to the ground, or by kicking zombies which causes some damage. The best thing about this type of survivor is that you can hold two hands at once. This tactic is useful in some scoops such as The Woman Who Didn't Make It or Above the Law.

These survivors are too injured (or drunk) to walk, and require assistance. They are the least common. They are a burden in groups since Frank is required to support them by shoulder or carry them on his back, rendering him unarmed, but are extremely easy to escort individually. They will attack zombies if one gets close enough.

There is a plus side to having one of these survivors in your group, because if you are carrying one, the zombies cannot grab Frank.

During the story, you will be required to follow Brad or Isabela. Without your assistance, they will usually die, but both are armed with a pistol and have the AI of a normal survivor. They don't count as survivors in your party during this, although Isabela also accompanies Frank in the two prior categories as a regular survivor. If they die at any point then all cases will fail.

If the player chooses to attack survivors, they may defect. If you hit a survivor too much a purple caption will appear on the screen, saying they are defected. This means they lose all trust in Frank and turn hostile toward him, either trying to kill him or simply no longer following the group. If this happens you have no chance of rescuing the defected survivor. Survivors may also defect if their friend or a loved one is killed or defected themselves, such as Jeff & Natalie or Tonya & Ross.

These are survivors who are inevitably killed. No matter what you do, these survivors can't be saved.

These are similar to defected survivors except they only appear in Infinity Mode. Every in-game day at 12am, 7am, and 7pm, between two and four survivors (including victims) from 72 Hour Mode will spawn in different areas of the mall (most of whom are armed with weapons), and will attack Frank immediately upon seeing him. When killed by Frank, boxes will appear over their corpses, and will drop food and weapons when approached. When killed by zombies, the boxes will not appear. 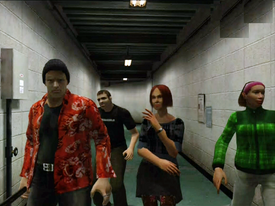 Due to the game's poor Artificial Intelligence (AI), escorting survivors can become frustrating and problematic for some players. Most of the time, Frank can find that one of the survivors have found him/herself in a horde of zombies, dying, or left behind in a completely different area, forcing him to wade through an ocean of zombies to rescue the survivor.

Upon finding a survivor, simply press the

button near them to begin the dialogue sequence. In the process of a conversation, Frank may have to reply multiple times to convince them to follow him. Some scoops also require Frank to carry out certain actions, such as delivering items or having a particular survivor in his party. Once the survivor is convinced, they will join Frank's party.

button will have Frank shout out "Follow me!" or "Come on!" to any survivors in his party. This command has the effect of causing the survivors to stop their current actions and head towards Frank. Using this command will cause any existing waypoints to be deactivated.

button while holding the

trigger will have Frank shout out "Over there!" or "Go!" to any survivors in his party. This command will prompt the survivors to head towards the indicated location. Setting a new waypoint will cause the previous one to be deactivated.

Survivors may sometimes find themselves in the clutches of zombies. They will be essentially immobilized, unable to do anything but struggle to keep the zombie away until the grab is interrupted.

The current health level of survivors is indicated on the green bar above the character's head. The proportion of the health bar that is green represents remaining health. When survivors have less than full health, Frank can give them a food item to restore their health.

If a survivor is not near Frank when he moves from one area to another, they will be left behind. Their name and health bar will appear on the left side of the screen. The health bar will slowly deplete, eventually killing the survivor if he or she is not saved in time. This applies to survivors that have been encountered but have yet to join Frank's party, though their depleting health bars will not be shown on the screen.

Frank can give certain weapons to survivors, like a lead pipe, shotgun, or small chainsaw. Survivors will not accept big weapons, such as barbells, trash cans, benches, or any two handed weapon that Frank cannot store in his inventory and has to drop to pick something else up.

Frank can also give food to survivors and they will eat it to regain their health. Survivors who need assistance cannot accept weapon items but will accept food to eat.

With a few exceptions, only eight survivors can exist in the mall at a time. This number counts only those currently escorted and in active scoops. Other scoops will not be activated if they cause the total number of survivors to exceed eight.

Brad Garrison, Isabela Keyes, and Tad Hawthorne do not count towards this limit as Brad and Isabela are involved in cases and apply differently. Tad is not counted as his appearance is caused by completing Photo Challenge, ensuring that he will be spawned as soon as Photographer's Pride is activated regardless of current survivor numbers.

As Frank progresses, the prestige point amount for each survivor increases. Later survivors are worth 6 times more prestige points than what Jeff and Natalie Meyer give Frank.[1]

the survivors will all get stuck at the ledge, trying to jump up all at once.

). Then jump down to the rooftop and push the survivors until they each jump up.[2]

If a survivor is successfully escorted back to to the Security Room, then a short scene will show one of them offering their gratitude to Frank. Afterwards they can be found in rooms located at the back. They will no longer be able to enter the mall and the notebook will list them as Safe. 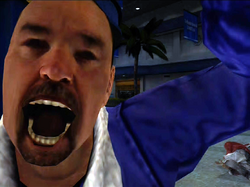 If a survivor's health is fully depleted from attacks by zombies, one of death scenes is triggered showing them being killed by the zombies in a gruesome manner. If you go to where they died you can see that they themselves have risen as a zombie and will behave accordingly.

Frank's notebook will also list the survivor as Undead. This works for every survivor (and if you are lucky enough to encounter this glitch, psychopaths).

If a survivor dies for any other reason, then the survivor will simply die, and be labeled as Dead in Frank's Notebook. Another death cutscene may involve the survivor committing suicide by pulling out a handgun they may not have previously had.

For example, if Aaron Swoop is overrun by a zombie horde and killed, this cutscene is occasionally triggered. 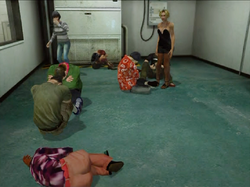 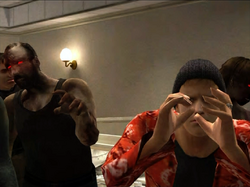 Frank escorting 8 survivors.
Add a photo to this gallery

Retrieved from "https://deadrising.fandom.com/wiki/Dead_Rising_Survivors?oldid=390842"
Community content is available under CC-BY-SA unless otherwise noted.